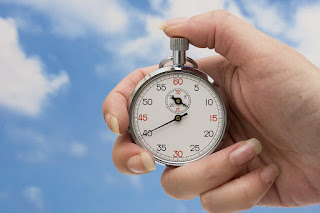 The place I'm currently cat sitting has some pretty gnarly parking laws around it. I can try to find a place a few blocks away or move my car every hour. Today I've been doing the latter and I might keep on for the duration of the trip.

Why? Because I get to have short, timed, focused writing. I come in. I set my keys back down. Maybe have a drink or use the restroom and it's about 45 minutes until I need to move my car again to avoid any hint of impropriety before a zealous meter reader who marked my car the second I walked away cruises back through like a t-rex sniffing the air.

A timed writing exercise is nothing new–you've probably done a thousand of them before, but what often gets overlooked is how useful they can still be to a seasoned writer. It's too easy to look across an "entire day" and push writing back and back and back until it's in this tiny corner. Or to sit down to an "hours long session" and spend the first half of the time futzing on Facebook or playing Gardenscape because those hours stretching out gave you a sense that there was much more time. We tend to question ourselves less under deadline and push ourselves harder. Plus it's easier to put off distractions for "a few minutes" than it is to be good about them all day.

Then suddenly, with your back against the wall, a few minutes worth of work actually gets done. Certainly vet writers have their days where it all just falls into place, but they also have their fits and starts too. Sometimes it's just a lot easier to think about sitting down to write for a half an hour than an afternoon.

Use your current work in progress provided it is a first draft. If your WIP is not a first draft, pick something else or start something new. It's important that you not be working on something where you mull over a word choice for several minutes, but rather a piece where you're trying to get it out onto the page. Set a timer for NO longer than 45 minutes. The "sweet spot" will be somewhere where you will feel the pressure and your mind won't wander, but also before you can become overwhelmed and then bored by writing at a heavy pace. Most season writers will be able to do 45 minutes easily–resist the urge to do more. Newer writers may have to do less, but less than ten minutes is probably too short.

Set your timer and begin to write. You don't have to scribble furiously. This isn't necessarily a free write (where the "pencil must keep moving") but you do have to keep writing. No checking other tabs or doing anything else for that 45 minutes. When you're done you can do whatever you want: Facebook, check your phone, research, "research," but for now just keep making words.