Not Actually a Cook (by Mary Anne Mohanraj) 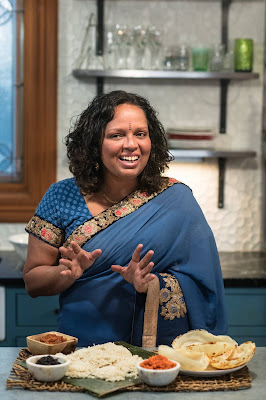 I was being interviewed a few days ago for my new cookbook, and I heard myself saying, "I'm not really a cook."

Which makes sense -- I didn't go to culinary school, or train in a restaurant kitchen. (Though I did put in my time as a teenager at Bickford's pancakes as a waitress, and Papa Gino's pizza, as a cashier and dishwasher, which ought to count for something.) I have no formal training.

But on the other hand, it's ridiculous. Of course I'm a cook. I've been cooking since I was a kid, from the first time I followed a recipe to make microwave cheesecake (surprisingly effective).

I've been a cook since my mother stood over me, as I chopped onions for her curries, the only task she trusted me with in the kitchen, and even then -- "You're not chopping them finely enough. Do it again." (That same interviewer, a professional chef, told me that culinary school starts exactly the same way -- Amma knew what she was doing.)

I was a cook in the dorms at U Chicago, when I called Amma freshman year, desperate for something other than cafeteria food. She told me how to make beef and potato curry over the phone, and I cooked it in the shared dorm kitchen, over and over again that year. It was the only thing I really knew how to cook, but I still remember how my new boyfriend dug in, how my roommates and I sat at the table with a big loaf of Wonder bread and ate steadily, greedily, sopping up every last bit of curry sauce.

I was a cook when I was a starving just-graduated 20-something, dodging my landlord in the street because I hadn't found a job in two months of looking and as a result, was two months behind on rent. (I literally ducked into an alley once, because I saw him walking towards me.) Cooking that summer was mostly ramen, with bits of vegetable and hot dog thrown in, but it was tasty enough, and more important, it kept me fed. That's cooking too.

In grad school, I figured out the rotation. Make a big pot of beef curry on Sunday, along with rice.  (45 minutes) Add a vegetable curry Monday. (20 minutes) A different vegetable Tuesday. (20 minutes) A big chicken curry on Wednesday (45 minutes). New vegetable Thursday and Friday, and now we're scrounging leftovers or maybe making a sandwich on Saturday, and getting ready for the next week. Somehow I subsisted on $20/week of grocery money, in Salt Lake City in the 2000s, and managed a slightly different dinner every night. I felt like a cooking genius!

And now it's almost 20 years later, and I've been cooking forever, it feels like. Dinners with friends, and intimate romantic dinners with my husband on rare occasion. Plenty of pots of instant mac-and-cheese with the kids when they were small. Pasta bar for potlucks every Saturday on game night, when life isn't too hectic.

Big Sri Lankan feasts for everyone I know on April 14th, Sri Lankan New Year, and again at Christmastime, when we do a colonial Christmas, a combination of Sri Lankan short eats, finger sandwiches, trifle and fruitcake. (For those last two, I start cooking weeks in advance, and freeze as needed.) It's a way to share culture, share community, that makes my heart sing.

Even more important, the days I cook several curries and plenty of rice, and pack them up to drop off to a neighbor with a new baby, or someone going through cancer treatment. I remember when someone did the same for me -- I will always appreciate that mac-and-cheese and broccoli that fed my kids when I wasn't able to. All of this is cooking.

So when I say I'm not a cook -- that's ridiculous. Of course I'm a cook. I'm a cook, and a mother, and a writer, and a teacher. And sometime I feel like I'm not doing a great job with one or the other of those, or sometimes not with any of them. Imposter syndrome rears up its head, and denies me the very word, the 'title.' That's when you have to stuff it down again, that little, frightened voice.

Natalie Goldberg has an essay in her wonderful Writing Down the Bones, where she talks about giving yourself permission to call yourself a writer. If you write, you're a writer. If you cook, you're a cook. If you parent, you're a parent. And if you don't do it as well as you'd like -- well, as my daughter is probably tired of hearing me say, just practice.

You will, I promise you, get better, if you do it. Just do the thing, whatever the thing is. Take a little care, try to do it better, but mostly, just keep doing it. Someday you'll look back at what you did decades ago, and what you're doing now, and be amazed at how far you've come.

Mary Anne Mohanraj launched crowdfunding for her new Sri Lankan American cookbook on Tuesday night, and has been astonished and delighted by how well it's done.  She's aiming towards stretching goals now!

Check it out on Kickstarter:  https://www.kickstarter.com/projects/feastofserendib/a-feast-of-serendib


Mary Anne Mohanraj is author of Bodies in Motion (HarperCollins), the Lambda-award-finalist SF novella, The Stars Change (Circlet Press) and thirteen other titles. Bodies in Motion was a finalist for the Asian American Book Awards, a USA Today Notable Book, and has been translated into six languages.  The Stars Change is a science fiction novella, and finalist for the Lambda, Rainbow, and Bisexual Book Awards. Previous titles include Aqua Erotica, Without a Map, and A Taste of Serendib (a Sri Lankan cookbook).  Mohanraj founded the Hugo-nominated magazine, Strange Horizons, and was Guest of Honor at WisCon 2010.  She serves as Executive Director of the Speculative Literature Foundation (speclit.org), has taught at the Clarion SF/F workshop, and is Clinical Associate Professor of English at the University of Illinois at Chicago. Mohanraj’s recent publications include stories for George R.R. Martin's Wild Cards series, chapters for Ellen Kushner's Tremontaine at Serial Box, and stories at Clarkesworld, Asimov's, and Lightspeed.  2018 titles include Survivor (a SF/F anthology, stories of trauma and survival), Perennial (a breast cancer memoir / romance), and two Sri Lankan cookbooks, The Marshmallows of Serendib and Vegan Serendib.

If you would like to write a thinly veiled promo for your own work guest blog for Writing About Writing we would love to have an excuse to take a day off a wonderful diaspora of voices. Take a look at our guest post guidelines, and drop me a line at chris.brecheen@gmail.com.
at April 05, 2019