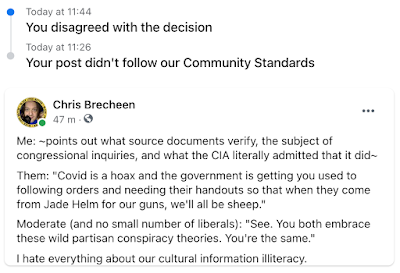 Apparently FB algorithm bots just crawl for keywords and don't actually know the difference between saying something and saying someone said something. Which seems like an absolutely critical failure on all possible levels if you're leaving your censoring to bots.

Anyway, 95% of my blog visibility is through FB, so there's really no point trying to get the article up that I had planned if I'm not going to be able to post up when I'm done.

It'll be up tomorrow, and if I need to, I'll wrap the thing I had planned for TOMORROW around to the weekend or slap it up on Thursday even though that's my day off.

In the meantime, I'll work on my taxes, take the rest of the day to finish this post instead of trying to bang it out in the next hour (hur hur "bang it out"), make something for lunch that doesn't come in a cardboard box, and maybe even take a nap.