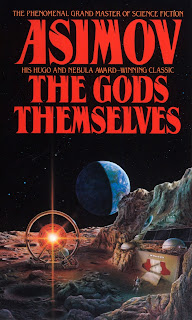 The results are in! These are the books you all recommended (often more than once). I was really excited to see how active this conversation was. Unfortunately there were a lot of folks nominating outside of the rules—either books that were part of a series or books that were written after 1980 (sometimes both!), so as great as they were, I had to expunge them from our list. Tuck those great works in your back pocket for the day when they fit the nomination criteria.

Thank you all so much for participating. Even I picked up a couple of books to add to the "To Be Read" pile this time around.

Now on to the results…

The Gods Themselves, I. Asimov 4

Stranger in a Strange Land, Heinlein 4

The Lathe of Heaven, U K LeGuin

A Clockwork Orange, A. Burgess

Day of the Drones, A. M. Lightner

Travels into Several Remote Nations of the World. In Four Parts. By Lemuel Gulliver, J. Swift

The Dispossessed, U. K. LeGuin 4

The Man Who Fell to Earth, W. Tevis

Woman on the Edge of Time, M. Piercy