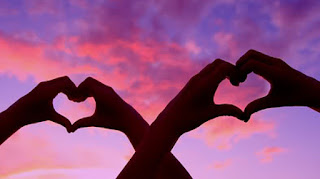 The sweet caress of twilight. The magic in the air.

When the muses totally saw you hit the ceiling.

Mental synchronization so amazing that you finish each other's…sandwiches.

And of course that complete torpedo of vasopressin, adrenaline, dopamine, and oxytocin straight to your ability to write.

Yes, it's true. For writers and creatives and probably all kinds of folks who have certain kinds of "temporarily-half-ass-able" jobs, love can be a real threat to productivity. Yes, love is a wonderful slippery, out-of-control bliss feeling, and let's write a poem and a song (or five million) about it. But it's also a time of imbalanced brain chemistry, impulse control overpowering judgement, the same physiological biochemistry as a cocaine addiction, trying so hard to avoid symbolically being attracted to the parent(s) you had a rough relationship with so that you can "fix" the past, and oh, did we mention out-of-control?

It's no wonder that, while some people deffo get addicted to that feeling of FALLING in love, and will even hop to a new relationship as soon as the falling feeling starts to fade, most folks (MOST folks) are actually a little relieved when the haze starts to clear and they can kind of feel themselves and think straight again.

Artists and writers have to deal with this particularly hard. As much as another human can sometimes be an artist's "muse," inspiring them to great creative heights, it is equally likely that they will fall head first into what is happening and find that focus and concentration elude them. While ideas can pop like a bag of microwavable popcorn in the second minute*, the ability to sit down and do the work takes a pretty decent hit. Suddenly you're taking all your vacation time, blowing off deadlines, and definitely phoning it in sometimes even though you know you really. Should. Not. Do. That.

Particularly if you're like me and you write every day (or multiple times a week) and ride those deadlines closer than the neutronium molecules in the dense core of a neutron star,* your schedule is prone to be affected in real time in a way that you can't, unlike like a writer who might work more behind the scenes or in bigger chunks. Although I've definitely heard of writers who had to tell their agents they had nothing after gloriously missing a deadline three months after they fell in love, which is probably professionally more hazardous and difficult a feeling of failure than a couple of blown articles and a few phoned in posts. But probably for the most part, we daily content creators share our goo-goo eyed walking into walls on our sleeves a bit.

I promised that this blog would be a realtime chronicle of the things I learn—both tricks that work and pitfalls to avoid. And while the best advice to a writer for their deadlines might be never fall in love, I couldn't in good conscience give such advice to anyone, particularly not an artist. You might need to write (or do whatever your craft is) with a boring, regimented discipline, but around those margins of work, life is messy and an artist isn't like most people who spend their lives trying to make it less messy. An artist tries to bury their arms in the messy up to the elbows like an unsupervised two-year-old who found the art supplies cabinet*.

(*Are you kidding me with this shit?)

Yes, some people are aromantic, and this advice is moot to them; to everyone else I say, "be not afraid." Go let your life get a little bit complicated and be the richer for the experience. I'm also ethically non-monogamous, so I might have slightly different advice than most people about falling in love if/when you happen to already BE in a relationship, but the ethical is still the important part, so if you can cleave to that, sally forth! Blow a couple of deadlines. Get carried away. Let go and be just a little bit scared of how out of control you feel. Be like Alice Walker's characters*. This is one of the most fundamental experiences of the human condition, and in ten years you won't care that you had a rough professional time for a few months, but you might care if you didn't take the leap into a life-changing experience with a resounding hell yes.

(*No one is going to get this reference. You need to stop.)

Perhaps the most important thing to remember if you find yourself a writer in love (and barely able to squeeze out a few sentences, nevermind that 40 hour pace that had come to define you) is the following comfort:

Not the love. Not the IN love.

Sorry, but that blast of dopamine, adrenaline, and serotonin is only going to be replaced with vasopressin and oxytocin, and open up a lot of deeper and more bonded emotions. But this mind-numbing, brain-scrambling moment where you stare at a blank computer page and a blinking cursor thinking about nothing but texting them and when you see them next (when you can tear yourself away from THEM at all) will fade. That feeling that you're falling and there's nothing to grab onto, and the only thing that makes that sick feeling of missing them better at all is being in their arms…that'll at least get manageable. You'll get your brain function back. In a month or two, you'll be able to write for an hour at a time, and in about six months, you'll start finding that old spark comes right back like high-waisted denim jeans and bucket hats in a Gen X singles bar*. I'm not saying you start ignoring someone you're in love with or take them for granted in favor of writing time or anything (and if you do, you have some other problems that you might want to work through), but at the very least you should not be blasted for all of time with this profound inability to word.

Enjoy your spinning, out-of-control moment. Enjoy it because that's all you can do.

Your writing will be waiting for you on the other side.