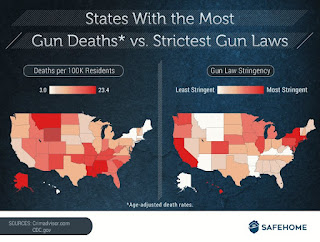 I have a friend who pulled a gun on an attacker who was probably going to rape her. She understands that gun is statistically more likely to be used AGAINST her, and basically doesn't care. Which, I agree, is her purview as an adult who is allowed to manage her own risks.

But this story was the exception. Not the rule. For every one person defended by a gun, there are 34 who get shot and die.

It's your choice to play those odds, but don't fucking LIE about it.

I want to stress that this should probably be a risk vs. reward analysis that an adult gets to make on their own. We don't force people to do the statistically less risky things or we'd all fly everywhere instead of taking road trips because flying is safer, and we'd outlaw hot dogs because they are so easy to choke on.

But stop lying about it. There is no veracity whatsoever to the claim that guns make you safer. They don't. There is literally no statistical or logical way to support this claim, and other than emotional appeals and anecdotes, there is no way to defend the idea.

Guns don't make you safer. They make you less safe. Period. Accept the risk. Don't. Up to you. But don't pretend it isn't true.

And if that's your choice, you get to make it because you're an adult in a country with that particular civil right, but let the rest of the fucking country have a conversation about the laws that will reduce the chances of your choices killing our children, and for fuck's sake stop fucking LYING about it. You look morally bankrupt on top of untrustworthy.

Bullshit rating: Telling me this is chocolate isn't going to fool me.