Bullshit Narrative 5- "The Problem is [Some Bullshit That it Clearly Isn't]." 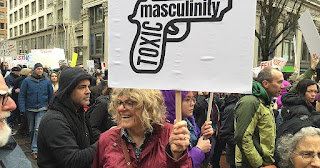 Previous Bullshit Argument: "If We Outlaw Guns, Only Outlaws Will Have Guns."/"Criminals Don't Obey Laws."
Or all the way back to the menu.

"The problem" is a lot of things and anyone who wants to make it only about their little ridiculous fucking pet issue is insta-wrong. The calculus that goes into something like this is complicated, but it's not impossible to parse the biggest contributors by looking at the lowest common denominators between virtually every shooting.

These are the lowest common denominators. There aren't any others.

Race is a small factor (white men are slightly more often shooters than other races, as compared to the population at large) but not by conspicuously overwhelming margins. Jilted dudes (with their sexist entitlement) are terrifyingly overrepresented, and many of them first kill a woman close to them before their rampage, though this is not universal.

This paints a pretty easy-to-decipher picture about what happens when you take bigoted, abusive men with anger issues, and then hand them a weapon that can kill dozens of people in a minute.

Here's what it ISN'T: It isn't mental illness. It isn't autism. It isn't video games. It isn't violent movies. It isn't lack of spankings. It isn't absence of school prayer. It isn't fluoride in the water. It isn't Ritalin or abortion or how many doors the schools have. It isn't Loony Tunes. It isn't whatever the fuck weird ass shit someone wants to try and Texas sharpshoot. (Ugh, what an awful name for a fallacy right now.) Those things are not common enough to be causes. Those things may have contributed to the complex calculus that makes a human mind embrace something like this, but they are not the root causes.

This isn't rocket science. Or brain surgery. Or rocket surgery...on the brain of the science rocket. It's toxic masculinity in abusive fucknugget MEN (often entitled men) who are able to easily get their hands on something that can kill a lot of people really, really fast.

There is no part two.

Bullshit rating: Hard to see, but definitely there and super smelly; you probably already have some on your shoe and have gotten used to the smell.