Bullshit Argument 24- "American Lives" or "Won't Someone Think of the Children?" 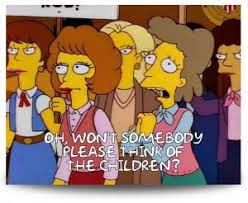 You could probably get someone to throw a punch by pointing out the hypocrisy needed to pretend they literally are incapable of understanding a statement like "black lives matter" while holding onto a position like "America first" but of those two, only one of them is exclusionary, xenophobic, nationalistic, rooted in white supremacy, and trying to prioritize a group that is generally already at the top of the socio/economic hierarchy,  so it's not a perfect comparison—mostly just a way to point out "Oh so you actually DO get the concept."

For as long as I've been alive, "the children" have been used to weaponize every homophobic, transphobic, body-autonomy-crushing agenda the GOP sees fit to try and use as a wedge to fire up their Christian base right around an election. "American lives" has been used since early fall in 2001 to be the rallying cry to legitimize oppression, surveillance, torture, and an erosion of all the rights codified in amendments that aren't the second.

And don't even get me started on how those "American lives" are ACTUALLY treated when things like veterans issues or homelessness are the topics on the table.

Not that I particularly want these arguments trotted out on the regular, given what they almost always defend, but gun advocates need to understand that if they do nothing while school shootings happen several times a year, they don't get to use these points anymore. They're going to start getting that same laugh that Trump got during the debates when he said that no one respects women more than he does. If they don't do something it becomes brazenly, unavoidably obvious that they do not actually care about human lives, American lives, or children's' lives. 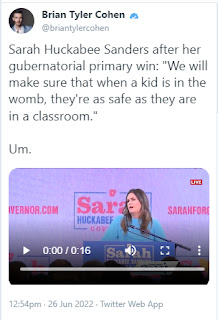 I mean I hope that people start behaving in a way that takes into consideration things like "the children" who are being killed because they care about children who are being killed and not because they're worried that their breathtaking hypocrisy is going to get them eaten by irony demons or lose them political points, but it's worth pointing out.