You know the NRA doesn't allow guns at its conventions? Can you think of why that might be? But sure, more guns is probably the answer, so let's arm teachers.

Know who this narrative benefits?

People who want to sell guns.

Now.....remember who pulls the NRA's strings?

That's right. It's people who want to sell guns.

Nothing about the world of guns suggests that adding many many more of them into a landscape filled with minimally trained civilians would make people safer. In fact, every expert and every bit of evidence suggest that it would make things much MUCH more dangerous.

Insurance companies have outright refused to cover schools that even consider this as a policy. Experts have said this is a bad idea. Even combat vets are unenthused.

What do they know that your average bad argument-maker doesn't?

They know that adding more guns isn't a deterrent as much as it is a recipe for disaster. Best possible case scenario, a shootout with lots of wayward bullets. Worst case? Accidents. Statistically speaking, as you add dangerous things to places with kids, you get accidents. It's why you barely have jungle gyms any more that aren't coated in soft foam and built over this spongy rubber mulch. Kids are (literally) not able to assess danger the way that adults do because that part of their brains hasn't formed yet. That's why they don't get the final word on how to live their lives until the age of majority.

Guns have already been left out by teachers, showed off to students in non-emergencies, found by students. And of course accidents are going to happen. And this bullshit policy hasn't even started yet! Every bellwether that exists says "This is a terrible, terrible idea.”

There's a reason the NRA won't allow guns at its conventions.

Let me just say that again.

THE NATIONAL RIFLE ASSOCIATION—the pro gun group behind almost all of these bullshit arguments—does not allow guns at their conventions.

There's a reason that soldiers have to check their weapons when they're not on a mission unless they're on a billet that requires it. There's a reason airports and federal buildings and government buildings don't allow them.

I'll give you a hint. It's not because ubiquitous guns make things so much safer. It's because these institutions know full well how fucking dangerous guns are. They know there's no way to ensure someone is a "good guy." They know that a firefight between a bunch of people who think they're the good guy would be a fucking disaster.

Set aside, for a minute, that these are the same teachers begging for textbooks and humanities funding, and counseling and the things that maybe actually COULD have helped before the shooting started: how long until some teacher kills a student because they felt threatened or just has a Blackboard Jungle moment. And even if we could somehow guarantee that every armed teacher were simply a paragon of gun safety and weapons training (patently absurd), there's basically no evidence that "good guys with guns" would act as a deterrent (see earlier arguments).

While most educators wouldn't want firearms on campus, the worst part of this narrative isn't that the idea is floated at all. (Hey, sometimes we throw spaghetti at the wall, and we all have different views on guns. Let's talk about solutions.) The worst part is that it is mic-dropped by people who actually don't want to address root causes and refuse to acknowledge that this spaghetti is NOT sticking. It's used as a fire and forget missile. It's the shutdown argument when the shooting happens on a school. "Arm teachers. Problem solved. Let's get a beer." and the objections and concerns and even logistics are basically ignored. ("Sorry. I can't hear you talk about background checks and toxic masculinity over the sound of me solving all the problems with a two word phrase.") 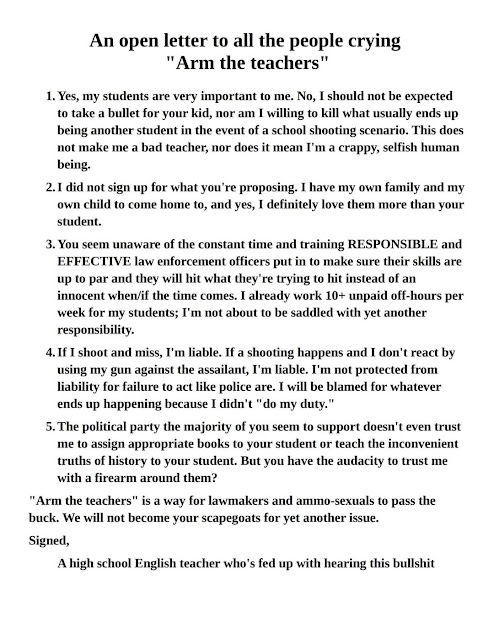