Bullshit Narrative 16- "Pipe Bombs. Crossbows. With a Will, They'd Have Found a Way!" 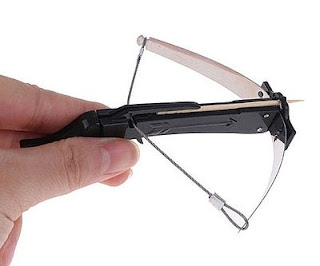 You know how I know that the sweet spot between cost, accuracy, range, lethality, and convenience is an automatic rifle?

Because every fucking army on the Earth is NOT deployed into the field with nothing but homemade pipe bombs and Bowie knives. Cause that would be, like….WAY cheaper and then we could just make sure that all the soldiers are really "determined actors." That's all that matters, right? Determination?

I realize many are capable of imagining a Blood Vengeance VIII type scenario in which Actionheroguy Shwartzenstallonedamme kills a bunch of people with his left thumb and a toothpick, but this crosses the Rubicon of realism into movie-addled fantasy that makes even some of these other sophist arguments look erudite and well thought out.

These massacres are often planned out for months and so there IS some merit to the idea we cannot JUST pass a gun control law and call it a day. Like most things blazed to black and white and single serving solutions, it's far more complicated than that. We need to be having conversations about and allocating resources to helping combat toxic masculinity, male entitlement, bigotry, and yes…even the stigma around mental health issues. There's more going on than just access to guns, but to act like someone could do just as much damage with homemade or medieval weaponry is the pinnacle of disingenuousness.

Bad actors may always get the urge to be violent, but we don't need to make it easier for them to do so with a dismissive shrug. We're talking about how easy it is to ACT upon that urge.

Bullshit Rating: Just because you call it a cow pie, doesn't mean you should eat it.