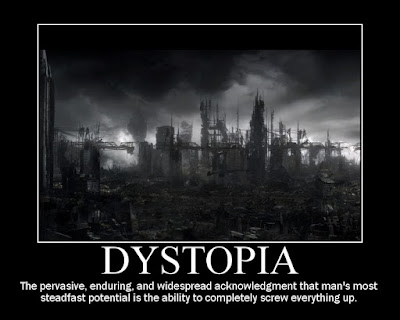 Our November poll is live. With fifteen nominations, we will have to do some semifinal polls to find out which dystopias will be going on to the final round.

The semifinal polls will only be a little over a week each. I'll put this one up until next Tuesday and the following one until the Wednesday after that. That means that everyone who votes early will get to vote often since Polldaddy can only store the IP of your voting location for one week.

Everyone will get four votes (4). The top four names will go on to the finals. Before you simply vote for your favorite four, consider that, as there is no ranking of those four votes; each vote beyond one dilutes the power of your choices a little more. So if you have a genuine favorite–or pair of favorites–it's better to use as few votes as possible.

The poll itself is on the left side, at the bottom of the side menus.
at November 17, 2015