Another Round of Not Writing Questions (Mailbox) 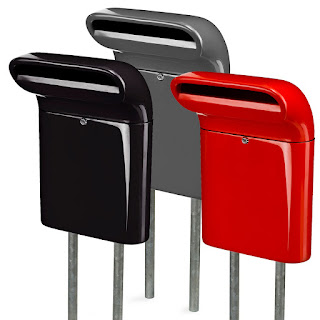 Am I a communist? Is my tongue pierced? Why are all the "You Should be Writing" memes white dudes?

[Remember, keep sending in your questions to chris.brecheen@gmail.com with the subject line "W.A.W. Mailbox" and I will answer a couple a week.  I will use your first name ONLY unless you tell me explicitly that you'd like me to use your full name or you would prefer to remain anonymous. And while I will answer these weird non-writing questions for cheap laughs, I tend to pick the writing kind most of the time.]

It's time for another round of Questions that Have Nothing (or Very Little) to Do With Writing™. Gathered over the weeks and months and years, I usually don't answer them until I have enough to do a whole post.

Are you some kind of communist or something? 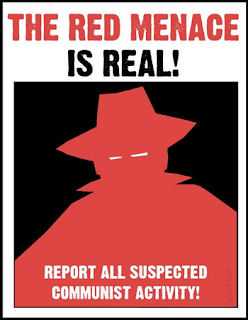 Don't you know that every artist is a dirty pinko commie? That's why you have to be very careful around us, comrade.

I'm not as much of an [any label] as I am not a big fan of capitalism, which is sort of a bummer because I live in a place where being anti-capitalist is sort of outside the boundaries of what is considered acceptable political discourse. The Demliest Dems in Demville still cleave to the idea that capitalism is the best thing since exploiting the proletariat to slice their bread. We fight wars, suppress whole populations, assassinated heads of governments against treaties we've signed for screwing around with socialism, and call any effort to mitigate intergenerational poverty cycles a "welfare state."

I could rehash all the weirdness of capitalism here like the rampant commercialism and conspicuous consumption, the privatization of services which should be part of the public good in a bidding war race to the bottom, liability shields, a need for humans to be "productive" despite growing automation, and the anti-democratic, anti-free market, and anti-individualism tendencies within capitalism that unfailingly show up whenever those things threaten a bottom line.

But mostly it's that capitalism requires inequality. It's not a bug–it's a feature. And not just a little inequality because "humans don't have equal abilities, bro." It requires massive human suffering and human indignity because it ALSO requires an inexhaustible supply of exploitable labor. And in order to feed its insatiable hunger it requires the increasing commodification of things like health and shelter. It incentivizes naked self interest at the expense of ethics, the environment, communities, or any rival system of resource allocation. Nothing–not human life, not human dignity, not human health, not other species existence, not ecological sustainability, not even planetary health, NOTHING–matters more than profit.

And it requires a narrative that utilizes the greatest propaganda machine in all of human history to convince us that no other system is even possible, a narrative that blames people for their own suffering under it's baked-in inequality, and that manipulates our feelings of love, community, ambition, creativity, and solidarity to take our resources from us in an effort so sustained there is literally no getting away from it without leaving society altogether–all so that ever more can flow into the hands of a tiny few. A narrative that continues to scratch its head in bemused wonder every time a corporation screws people, our access to clean air and water, a species of super-fauna, entire biomes, and indigenous peoples because it's good for their bottom line. And a narrative that says that we too, all of us, are all just a few hard day's nights from being millionaires ourselves, so we must never ever think of ourselves as exploited. 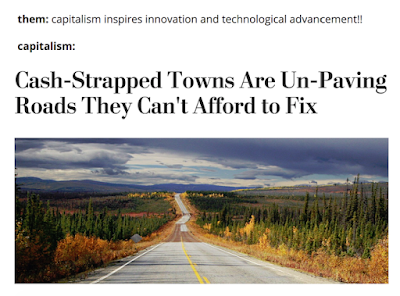 Unfortunately, I live in a country with a political landscape where my most pragmatic choice against the erosion of social security, progressive taxation, and health care I can actually afford is to vote against the person who swears to Charlie Brown that this time she won't pull the ball away the American people that this time tax cuts for the wealthy will create jobs even at the expense of every social safety net that exists, and to hope that the politicians on the left will move towards democratic socialism instead of placating an increasingly shrinking neoliberal center left group of monied constituents while failing to realize that playing nice with plutocracy will only get them the mad scrill they want for as long as it takes those plutocrats to defang the other bases of their power like unions and colleges.

But don't think for a moment I'm going to shut up and not say nothing.

Is that a tongue piercing I see in your pictures? Why on earth would you ever do that to yourself? 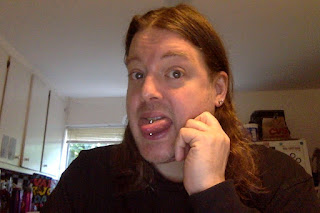 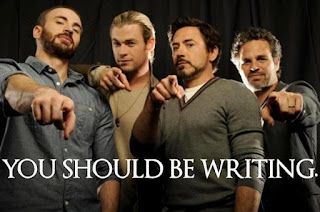 Why are all the you should be writing memes white dudes? Can we get some that are something else.

This question is referencing my Facebook page and Tumblr blog where once a day I post some sort of "You Should Be Writing" Meme.

I only create a handful of these with text adding apps–and am particularly fond of using meme creators to fit them into the "grammar" of existing memes–but most of them I find hither and yon across the wide interweboverse. And yes they are overwhelmingly white men. (Not all, but boy howdy....) I dig around and look for others, but finding one that is anything else is quite a quest. 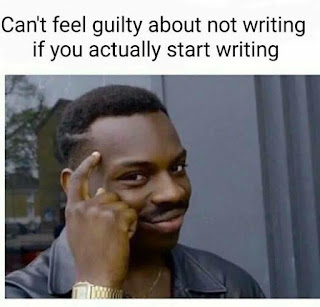 I have some theories. I don't think any ONE thing is the only reason, but I think they all work in tandem to form the ultimate combo move. Based on where I find these memes, I think they are often made by women FOR women (heterosexual women, you understand). They sometimes have "Darling" in the text or are particularly "smoldering" views. The few that have women in them are usually more of the "badass and empowering" variety than something made for the male gaze. They are also usually of actors (not writers), particularly following fandoms, and that means lots of white dudes because Hollywood and fandoms have nothing if not a profusion of white guys in them.

Interestingly, from what I can tell having posted these daily for years, if I put up someone who is NOT a white dude, the comments are much more....argumentative. Sometimes they include slurs (though those folks get swiftly banned), but I honestly think the white guys are seen, in a racist and sexist society, to have more authority.

I also wonder if anyone who might feel like we need more YSBW memes that are not white dudes might be exactly the type of person to not just slap that text on any ol' picture of someone from a more marginalized group to appropriate their image for a message that that person didn't necessarily endorse.

Regardless I'm always on the prowl, and if you find any, please feel free to send them on my way, and I'll happily work them into the rotation.