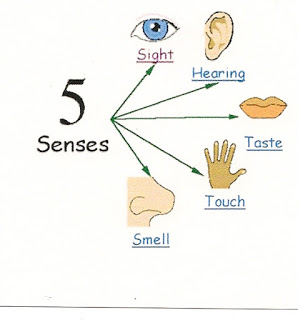 One of the first lessons a starting creative writer needs to learn--and often one of the lessons they still struggle with after years--is the power of concrete imagery* over abstractions.  Read any fiction from someone starting out, and there will be a lot of words dedicated to telling the reader how they should feel or huge swaths in the character's head devoted to their fee-fees.  Big, complex, abstract feels sweep over these characters and they spend pages wallowing in them with an emo angst that will make your readers wish Donnie Darko might pop by to bring on the verve.

*Imagery in this case includes sounds, smells, tastes, and tactile sensations.  I guess because assuming imagery covers everything is easier than inventing words like smellmagery or tastagry.

It's a tough habit to break because most people who want to be writers are all artsy and stuff and have the huge artsy feelings that they can't keep inside. Half the reason we spit words at pages in the still of night while everyone else has seen season 2 of Daredevil is because we realize the power words have for expression.  Words free us writers from the prisons of our minds.

But fiction gets a little trickier than emoting into a journal.

Unfortunately in most cases, it is preferable to create a vivid moment in a reader's mind and let them decide how they feel about it.  Yes, a writer can earn a moment of abstraction (even angsty emo abstraction), but for most readers pages of being told about the character's fee-fees becomes interminable. If a feeling isn't grounded within a reader's mind through concrete imagery, they are likely to start fading out, skimming, and wondering if that Michael Moore book might be a better use of their time.

What jumps into your head is not "the pain I felt tore at my innards," or even "I cried so hard my heart felt like it would stop beating in my chest," or any total bullshit like that.  What you probably are thinking of is a specific, concrete image: a sign about the hope of man left in an empty cage, a singing mockingbird or a pair of shears, a single sock tucked in a book, a rose waiting back home under a glass, a robot's eyes dimming for the last time, or ducks in Central Park.  The thing about the ending of The Grapes of Wrath that bores through your ribcage like an Anthony-Perkins-seeking Maximilian arm is not Steinbeck telling you how awful the situation was ("Superbad, guys. Trust me.") or even an in-the-head glance at Tom Joad ruminating on the depth of his feelings of frustration.  ("Man this shit is fucked up and I'm really torn up about it.")  It is the specific and concrete imagery of Rose's lips curling into a "mysterious" smile.  (Even 20 years after reading that novel for the first time, just writing about it makes me get the shakes.) Even when Steinbeck is doing the most abstraction about the nature of man, he is comparing anger with grapes and banks with terrible machines--grounding those huge ideas of humanity with the concrete imagery of the concrete symbols.

Think about trying to tell a joke without actually telling the joke.  "We all thought the joke was really funny and we laughed like crazy.  It was so funny our sides hurt.  Tears of unmitigated mirth dripped down my face as I tapped a wellspring of humor I never knew I had."

Gee, are you sure?  I've written three sentences describing how funny it is.  You aren't feeling it?

Until you actually describe something funny, you can tell people how hilarious it was all day.  They will dispassionately read over it while they start wondering to themselves if there's any Fiddle Faddle left in the pantry.  You must write something that actually IS funny if you want them to laugh.  (Like this: "Q: What did the fish say when it ran into a wall?  A: Damn.")

Now you're barely able to contain yourself, right?  Of course you're not.

The same thing is true of any other abstraction.

People seem to understand the thing about humor pretty well, but then when it comes to pain or anger or ideas like the complexity of man's cruelty to man in a face to faceless society they think they no longer need "the joke" and can just tell people how "funny" it is.  But without concrete imagery, it's just a writer assuring them that they ought to feel a certain way.

Get over that.  Even Ian McKellen thinks so.


Consider this handful of sentences that I read a lot of clones of during my time in the writing program: "I suddenly confronted a profound sense of loss. My father was dead. I felt like someone had emptied me out and left me hollow."

If I ran into this excerpt in a writing workshop, my first guess would be that writer is probably describing a memory of some kind--maybe the actual loss of their father. The reader is being told how to feel (or what the character feels, at best).  This writer probably experienced this moment with all its emotions and they were the most powerful part of the experience, so the writer tries to give them life and expression.

However, what is missing here is a concrete sense of grounding. Having experienced such a memory, we might take its viscera for granted, but our reader has not. You might remember the pain, but what were people wearing? What did the room look like? What was the temperature of the air? The reader doesn't have access to all those memories that ground your emotions to fill in the blanks so it's just a deluge of abstract feelings. Unless we have actually lost a father recently, this probably isn't going to resonate with us very much even though the writer is really letting loose from the heart.   Don't tell your readers "it was painful."  Reach into their chest, rip their still beating heart from within, and show it to them as you crush it.

Now how would a few concrete details punch this up? "I realized I would never again watch him trimming his bushy mustache with his little silver scissors.  I would never again bury my nose in the crook of his neck to catch a whiff of Brut aftershave as we hugged. I hadn't known it at the time, but Tuesday was our last trip to the water slides–the last time we would giggle as we shot down the blue tube and always failed to hold hands past the first turn. I couldn't cry. The tears wouldn't come. I just felt a hot agony beneath my rib cage like someone had taken a melon baller to my guts and scooped me out, one memory at a time."

Literary masterpiece? No. I'm in no danger of winning a Nobel prize. But this is so much better! You can see it, smell it, and ironically, feel it a lot more. You might not even know what Brut aftershave smells like (I don't) but it almost doesn't matter. A few concrete details go a long way.  Now this scene isn't an abstraction, and it's got far more impact. And it's not that you could never ever write the first example, but the only way  line would have worked is if it came at the end of a long line of concrete images.

No one would suggest that a writer can never talk about feelings, but the doorway to doing so is to ground those feelings in concrete details. A writer who wants to delve into abstractions will have to work much harder to earn that moment. Humans don't think in abstractions. We think in concrete sensory details. This is science, frands! Brain science!

I can illustrate this:

I'm going to say a word, and you think about that word give it a second to give the first real image that comes to mind.

What did you think of?  An abstract feeling divorced from any imagery? Almost certainly not.  You maybe thought of your last break up.  Or of someone crying into a pillow.  If you're me you probably thought of Forrest Gump sitting perfectly still in his house after Jenny leaves, staring off into space.

One of the most heart-wrenching moments in television is Anja's monologe in The Body episode of Buffy The Vampire Slayer.  It always gets top billing as one of best monologue in the show, and sometimes even for 90's television. I've heard from more than one person that it is the only moment in TV that has ever made them cry.  I was not able to find a clip of it (that wasn't a person with an iPhone recording themselves watching TV), but I'll post the text.

ANYA: (crying) I don't understand how this all happens. How we go through this. I mean, I knew her, and then she's, (sniffling) there's just a body, and I don't understand why she just can't get back in it and not be dead anymore. It's stupid. It's mortal and stupid. (still teary) And, and Xander's crying and not talking, and, and I was having fruit punch, and I thought, well, Joyce will never have any more fruit punch ever, and she'll never have eggs, or yawn or brush her hair, not ever, and no one will explain to me why.

Admittedly Emma Caulfield is an extremely talented actress, and takes these words to the next level, and some people will start to cry as soon as someone on camera is crying, but we can still do some creative reading even with pop-culture.  Notice where it gets really, really rough--not when she's crying or talking about how bad she feels.  As talented as Caulfield is, these abstract moments aren't the worst part.  It's when she starts to assault us with tiny concrete images about totally pedestrian things that Joyce won't do anymore that we lose it.  It is the moment with the first concrete visual (of getting back in a body) that starts to hurt, and then it gets worse from there.  We are brought to blubbering incoherence by two foods that are rarely consumed together and part of a hair care regimen.

Yes, most literature concerns itself with abstractions in its themes and ideas, but it does so by way of concrete details.  I may have to drink a tall glass of lye or at least take a shower with Comet and steel wool to platitude-ify this idea, but this is where "show, don't tell" came from.  And even though that pithy little bumpersticker wisdom has a lot that is problematic about being advice to writers, when it comes to abstractions, it's very useful to keep in mind.

And then he ended the post in a totally hilarious way that made everyone laugh until it hurt for hella days.