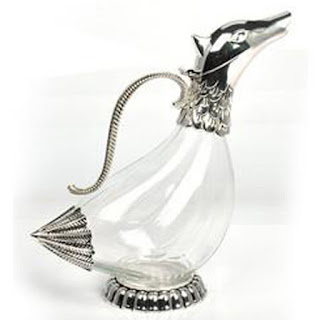 You know, if you pour liquid into a shaped glass, it takes on the shape of the glass, but that doesn't actually make it that shape. (Shatter the glass and it would flow everywhere.) So if you had water in, say, a duck-shaped decanter, it would still be water. It would not be a duck, or even *actually* duck shaped itself. It's just held into the shape of a duck temporarily.

Bigotry is the same way.

People pour it into containers (like "economic anxieties" or "deep concerns about electronic security" or "children's safety") so that it looks like something other than racism or misogyny or homophobia or transphobia–and then they claim it is whatever shape it's taking at the moment.

It's not that those things aren't real. (Real ducks DO exist.) It's just that that's not what the bigotry really is, even if it's being held in that shape.

"That?" they gasp, clutching their pearls. "That's not bigotry! That's a DUCK. My goodness how could you possibly accuse that of being bigotry! You are the real bigot here trying to impugn my duck as anything other than absolutely ducky!"

And then they set about giving their duck a name like Howard and printing it out a little birth certificate from the farm and equipping it with galoshes and rain gear and buying it a little bed and adding feathers to it. But "duck" is still just the shape that is holding together what's inside–and that is their bigotry. Even years later when they can barely remember it's not really a duck or when they give it to their children with strict orders that they must never let anyone question its duckhood, examine it too closely, or themselves think too hard about what is sloshing around inside....