It All Ends: Best Modern Fantasy (Final Round) 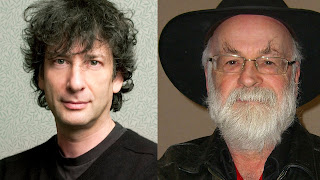 Our poll that began nearly three months ago with the call for some nominations has, at last, reached the final round.

However, shenanigans ensues. You have TWO polls upon which to cast your vote(s).

You see Terry Pratchett got on this poll twice with stand alone novels, and Neil Gaiman got on three times. And based on how each of them did in the semifinals, they're easily going to be at least the top three spots in a poll that usually only has eight choices. So I had to get a little creative to keep this (very) long awaited final interesting.

If they're going to be (whether it is from shenanigans or legitimate veneration) the top of every poll around them, then we will just assume they're going to kick ass and take names and pit them against EACH OTHER.

That's right. Poll number one is every Pratchett and Gaiman offering we had.

This poll will include eight of the top titles that would have made it to the final round had Pratchett and Gaiman not been on it. If you want to look at this as choosing the runners up, that's up to you, but one way or another, we're going to make this interesting.

In poll #2, everyone will get three (3) votes. The top four titles will go on to the finals.

The polls themselves are both on the bottom left of the side menus, below the "About the Author."

Also, seriously, I know there are a lot of people on WAW's Facebook Page and laws governing the internet determine that a certain number of people will leave nasty comments that their faves are missing without bothering to understand the context of our nomination process and quintillion earlier rounds, but consider this your hip check that you're turning the petulant up to eleven. "Oh sweet Jesus's Nip, how could my very, very favorite fave not be here?" Well, chances are that either 1) it was and now it's not because your very favorite fave was not enough other people's very favorite fave and more's the pity but I don't control that part, 2) there were rules that disqualified titles that came out before 1992 ("Why isn't Wheel of Time on here?" Because it's not modern according to the definition of this poll.) So, while I'm really sorry, showing up on the last round and declaring that if it doesn't have The Spinsters Orcsnogger Chronicles, it's just a completely invalid poll kind of makes you look foolish.

This final (these finals) will run for two weeks. By then I hope to have nominations for whatever I decide to start in December. That means that the IP logging will expire after a week. And since I can't really stop shenanigans, I encourage it.