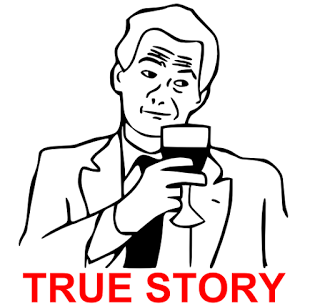 The absolute worst most epic, amazeballs advice to jet-propel your post NaNoWriMo week straight to submission and publication faster than the GOP trying to avoid debate and get to a floor vote.

So you're writing during NaNo because NaNo is awesome and you're awesome. However, unlike all the other "It was a great experience" losers, your novel is not only going to get picked up by a major publisher, it's going to rocket to the top of the charts. Your book's theme song will be Rocket Man, even if it doesn't have any spaceships in it.

This won't be because you worked hard, but because you know the secrets to unlocking your the full potential of your creative genius.

They say genius and talent can't be taught. But they only say that because they don't want you learning what I'm about to tell you. Your NaNo book has officially reached the inside track to absolute unadulterated awesome pure gold awesome. Follow my advice, and this will happen so fast, you will be able to spend your massive advance on Christmas shopping.

Seriously, I hope your peeps like riding around in Ferraris.

1- Don't worry about that word count.

Did you quit after like five days? Don't worry about it. What's important is that you got that killer idea onto paper. No one is going to care that your book isn't done yet once they see how fucking ridonkulous your concept is. They will hire a team of ghostwriters to finish it for you.

If you are not the kind of writer who can hammer out writing at a fevered pace, like 1667 words a day, stop not being that kind of writer and be AWESOME instead.

Book not done? 50,000 words kind of slim for a "novel," or maybe you stopped writing around Thanksgiving when life fell apart. Don't worry. You've got the main chunk of the beginning done, and any publisher is going to be able to see that it's absolutely genius. Don't fret about writing the entire thing out completely.  That's for later. Once you have the advance, you can get to work on the rest of it--or better yet, the publisher will probably assign you a phalanx of ghostwriters to whom you can just describe what's going to happen and they will do the writing part.

3- Be vocal about what you're doing, especially to professional writers.

You know how many people publish their NaNo books?

You know why? Because they don't spend time making connections like you're going to.

You of all people know the power of words. Don't water down what you're accomplishing here. Tell everyone (whether they ask or not) that you've written a novel. Put stress on the word novel and say it multiple times. Work the word novel into conversations.

If someone tells you that they're a writer, and particularly if you already know one, become even more enthusiastic about how you are writing a novel. Ask them to hook you up with their agent and publisher so you can let them see your novel. There is a very good chance that they will become so blown away by your sheer universe-altering will about your novel, that they will probably introduce you to their agent. If you say it, you give it life. So talk about your novel as much as you can. Novel.

Revision is for people who didn't write a good story in the first place. Did you not write a good story or is your story the biznizzle? Yeah, that's what I thought: you already know your story is awesome. A lot of people talk about revising their NaNo manuscript, but you can tell that deep down they know they just haven't struck mental gold.

But you have struck mental gold. That's what the elite team of editors that your publisher will assign to you is going to do.

What you want to do is get out ahead of the pack in shopping for an agent. Or better yet go right to the publisher since the agent will probably try to steal your work.

5- Don't even worry about that polish.

If you want to be a writer, believe in yourself.

6- Submit your novel right away.

The deluge of NaNoWriMo manuscripts is about to hit every publisher in the world. You don't want to get caught in this rush of losers. Even though your awesomeness is PARTICULARLY awesome and would absolutely stand out like a lighthouse on a foggy night, anyone can get a bad break if they're manuscript is in a stack of a hundred.

So how do you avoid getting lumped in with a bunch of plebs' sub-par manuscripts?

Not revising and not polishing isn't just about having confidence in how good your idea is. It's about beating all those losers to the punch. If they spend two or three days editing their draft, and don't submit until December 3rd or 4th, that's two or three days earlier that you will get in before them.

Is some publisher going to pass on your rockstar idea because you forgot a comma?

I don't think so.

Be sure to tell the publisher you send your novel to that you just wrote it for NaNoWriMo, and that it is so good you sent it immediately without even a revision. They will respect and admire your candor.

As will I, my fervid pixel shifting champion.

You've had a tough month. Time to put your feet up and let those creative batteries recharge. Take a month or two at least...probably longer. Relax. You want to be nice and well rested ready when the next lightning strike of inspiration hits. True genius comes in fits and starts not from daily persistence.

Follow these simple steps, and your dreams of having publishers pee themselves a little when they hear about you, and fall over each other to publish you will come true.