Serious For A Moment (Important Update)

I'd like to take a moment to talk about something serious. No persona. No over-the-top jokes. No running "evil mystery blogger" plot. We'll put off the Best Fantasy poll until tomorrow even though it's well overdue. And no, it's not my monthly request for patrons. Though it is something that matters to the future of Writing About Writing. Indeed, it might be the future of non-traditional publishing and the internet artist.

TL;DR- I know the issue has come up enough times to cause outrage fatigue, but please learn why the current struggle for Net Neutrality is particularly huge, and what you can do to maybe stop what will be a devastating alteration to the entire landscape of our internet experience. And you can even have John Oliver make you laugh up your lung while you learn.

For the longer version, and a bit of context, let me tell you a story: 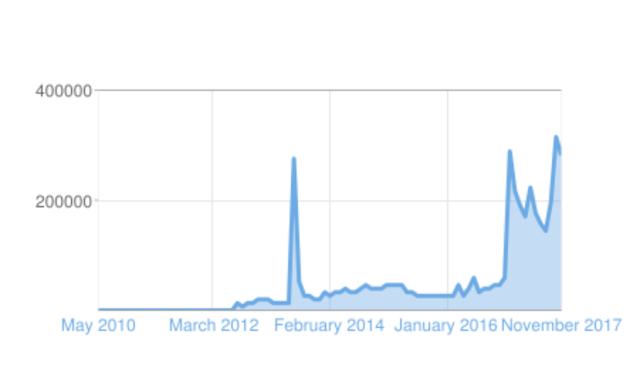 This is a picture of my "all time" analytics from Blogger. I'm probably going to break 300,000 again this month. You can't even see a single pixel of line on the graph from when I started in February 2012. In those days I would put up Hugh Grant dancing videos (from Love Actually) when a post got more than twenty of my friends to click on it. I felt like a writing GOD that day I broke a thousand page views. My first patron showed up after I had been writing six months and gave me ten dollars. TEN DOLLARS! In December of the year, after 11 months of writing, I cashed a check from Blogger (I ran ads back then–also Blogger sent out physical checks back then) for a little over a hundred dollars and I felt ten feet tall walking to the bank.

Six years later and I've been read by millions. Strange people I've never met recognize my name on planes and trains (no literally), and perhaps most amazing of all, through nothing but donations I have begun to be able to pay the bills through writing. Maybe not ALL the bills, but I wouldn't die (at least not right away) and I have pet sitting and child care trade to help.

As much as I am loathe to admit this, and as vociferous as I can be with deep umbrage of everything from content throttling to harassment policies that favor white supremacy, this is not a story of success that I can tell without also talking about Facebook. Simply put, none of this would have been possible without my Facebook Writing About Writing page.

This goes away if FB becomes something people have to pay for though their ISP.

Throttled content is nothing new to me. I've been dealing with the Facebook algorithm for years. If every one of the 600,000 people who have said they want to see Writing About Writing's posts actually got to see them, I would A) need a fraction as much work to build three times the audience around that page, and B) would be making a lot more money at this point. But they do limit who sees those posts because they want me to pay to advertise them. They especially limit links to other URL's and ESPECIALLY the hosts that a page admin puts up regularly–in my case Blogger. I tell people who ogle at my current salary from writing that while it is breathtaking now to be paying the bills, if they added up all the hours I promoted myself and for all the years, I still wouldn't have broken $1/hr. It was like having a 5 year unpaid internship for a minimum wage job.

This throttling content is old news on Facebook but it's starting to make independent artists' lives difficult on platforms like Twitter and Tumblr as "good stuff first" posts crowd out the things followers have ASKED to see. In many cases these are places artists fled to to escape Facebook's algorithm. 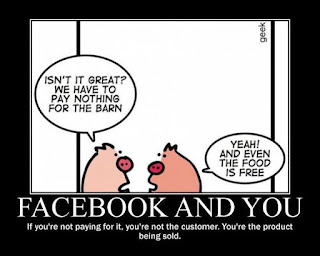 Of course, that's the price of doing business on Social Media. WE are the product and we're just playing in their sandbox. But losing Net Neutrality would bring a whole new set of players (the ISPs) into the game, eager to line their own pockets. If it were just me getting the squeeze, and just throttled content, I could probably figure out a "worth it" price point. I still run a $10 promotion once in a while to see what that does to my numbers. (Not much, TBH.)

The instinct is to think that "It Can't Happen Here." Just like everything else we were sure couldn't happen here until it did. The instinct is to think that greed will check greed and leave your average web surfer unscathed. (Can I use "web surfer" in 2017?) Surely FB will simply pay what the ISP's want so they are prioritized and keep getting their money from advertising, and if you aren't starting up your own new social media, your life will continue mostly unaltered (as if FB would simply sigh and lose their profit margin with a "Well, played, good chap!" and not somehow pass the cost on to SOMEONE). There may be "fast lanes" on the internet (which a moment's thought about why you spent all that money on your snazzy uber T-5 connection will reveal can't happen unless ISP's actually CAUSE slow lanes).

Except you can see in places like Portugal and New Zealand where there is no net neutrality, that is EXACTLY what has happened. The ISP's have squeezed companies that need bandwith like Facebook and Netflix, but have ALSO put the squeeze on the individual consumers. How many people do you know who would be willing to pay $100+ dollars a year to stay on Facebook? How many would be priced out? How many might pay this price, but at the cost of being able to do something else with that money?

And even if it doesn't go down exactly like this (and you would have to sort of believe in the generosity and restraint of a company like AT&T to think it wouldn't), it's not as if the companies squeezed are just going to give up their profit margins with a wistful sigh. They're going to pass the "savings" RIGHT on to all of us. And while we don't know exactly what that would mean, it is not unreasonable to imagine that content identified as promotional would be further throttled to try and squeeze out more advertising revenue.

Ending net neutrality will, for the sake of ISP's being able to make even MORE money, impact, and possibly destroy the careers of thousands of bloggers, vloggers, patreons, Etsy stores, Kickstarters, artists, non-traditional writers, and a wide diaspora of voices who have worked around mainstream gatekeepers to scrape out a living using social media to promote their work. (To say nothing of how the proposed tax plan eliminating business expense write offs would raise our tax burdens.) A whole generation of non-traditional creatives will be devastated.

There are huge and massive issues around how this will bring gatekeepers into the online world, exploit those with the most limited resources, and serve to further marginalize communities who have found a voice in a technology with a more even playing field. This will end so much of what makes the internet incredible and make it just one more place where the wealthy get all the good stuff.

And yes, this is a personal story too. I want this blog to stay where it is, grow, and not have to go back to being a hobby that I update twice a week while pursuing a "day job." I have opted out of traditional publishing because it was possible to do so, and I would hate to see that no longer be the case. So I hope everyone reading takes a moment to inform themselves of what's at stake, and then sends on a note (or five) to the appropriate folks.