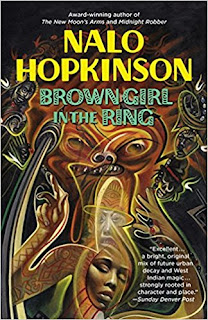 What is the best (worst?) dystopia written by a woman or a person of color or a member of the LGBTQIA+ community?

I am excited to run polls that don't just celebrate the same 20-30 white guys over and over, but only you can really see those polls succeed.

Be sure and drop the comment ON THE ORIGINAL POST, or it will get lost in the crossfire. That's also where you'll find the rules if you're confused about anything. There was a time when I could really go round and gather up all the breadcrumb nominations from all the various social media and posts, but things are way too busy these days.

Seconds are also needed. (And thirds. And fourths.) Remember that I will no longer be doing endless quarterfinal and elimination rounds. I will find a number somewhere between 8 and 22 of the most "seconded" titles. And there will either be two quick semifinal rounds or just the final round. I know that three and beyond aren't actually "seconds" but I'll still be taking the most.

So drop a nomination or two and second everything you want to see on the poll.
at March 21, 2018