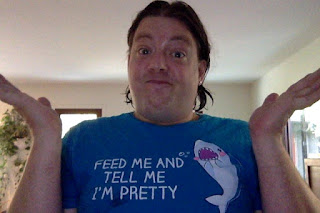 Plan A was to wake up and do a Twenty Questions post.

When I conceived of the idea of a Twenty Questions post it was based on a few questions I had gotten over the years that were really not tough to answer. They required a couple of sentences––at most a paragraph––and wouldn't have really made for a robust mailbox. Even two or three or four of them might have seemed a little scant in the "What CHRIS brought to the conversation" department.

Why not bundle 20 of them together?  Then I'd have a decent sized post, a cute little catchy title, and I wouldn't have to write more than a few short paragraphs.

The problem was people kept sending me questions that weren't exactly short answer. "What is the difference between traditional and non-traditional publishing?" "How can I keep writing with executive dysfunction." "Tell me everything ever about writers block and how to stop it."

Not exactly slow balls over the plate. And I know enough about being on the other side of those kinds of questions to have a sense of how it would come across if I gave them a flip answer just to keep it short.

So this morning I woke up, wrote diligently for eight hours, actually kept focus and didn't fart around too much on Facebook and got......exactly five questions done. I like the idea of twenty questions, but I'm going to have to shunt the ones that can be answered quickly into their own folder. Because soliciting questions ends up being basically 20 mailboxes in one post.

So it was time for plan B. Plan B involved jazz hands.

The kind of post I can get up in a couple of hours. Maybe the next round of Fortune Cookies or one of the admin posts that I would have done this weekend. But then I started to get a little pain in my kidney which is almost all better but still gets a tiny bit tender after a long day of not taking it easy. I figured that I just needed to lie supine for a few minutes to give it a rest.

Suddenly it was three hours and change later.

I'm no stranger to naps, but usually they're 45 minutes or an hour and I wake up ready to kick some ass, so the fact that I dropped behind the moon for an entire REM cycle after crawling in bed because I was still hurting a bit from a recent hospitalization leads me to believe that I'm still healing.

Waking up after the posting window complicated matters. I could post something after 6pm (especially if it's a post that people might come back to often), but with most of the English speaking world asleep or headed there, it's often a bust if it's some kind of jazz hands.

And so here is plan C.

Plan C is a bit of a "Coming soon!" I still have overdue admin posts to do and emails to dig through so this weekend will probably be a lot of that. (I spent a lot of last weekend convalescing and fast asleep but with the best intentions.) I finish this job on Sunday and am going to try to get to a wedding on top of everything else. (I usually blow off these things, but these are two dear friends and I really am going to try.) Next week should be my first fully recovered week without a lot of running around to do, so I should be able to get a few offerings from this mountain of half finished posts. I even have a guest post! Next Friday I'll be heading to Worldcon, and I actually plan on giving you daily updates about what that's like as it is a "writer thing." Or so I'm told. I'll keep plugging on the next week and at that point we should start to settle into a more familiar groove. At which point, there will be a MASSIVE undertaking to finish series posts and long-promised updates. And if you want the long-range forecast, that'll be about when the changes that all of you have made possible through Patreon donations will start kicking in. Not enough to leave my side gigs and just write, but at the very least, enough to stop taking so many double book pet-sitting jobs.
at August 10, 2018