It's NOT Just Words 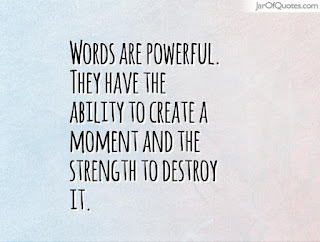 And if that still doesn't convince you, just say, "Black Lives Matter" and watch pretty much 100% of these same "just words" white guys turn a lovely shade of purple and begin to write paragraphs about how they are the real victims of racism. Just three little..........words.
A single word can bring with it the full force of a history of oppression, struggle, and intergenerational trauma. Anyone who mocks folks harmed by "just words," as if the sound waves themselves must be forceful enough to shatter bone if it is to count as harm, has only revealed their breathtaking ignorance of how language works, mental and emotional damage, and a rich history of propaganda. Not one war, not one atrocity, not one pivotal moment in history (good or bad) happened without words shaping every second leading up to them.
So it’s long past time that a liberal, pluralistic society retire the sophist idea that somehow words are themselves incapable of doing harm, and while expression itself should generally be protected with few exceptions, the attempt to shame anyone who visits a consequence on folks using harmful speech is, at best, fundamentally ignorant of the power of words.
And at worst attempting to preemptively manipulate anyone who dares to hold them accountable for that harm*.
(*Ironically, done with words.)
at June 05, 2020