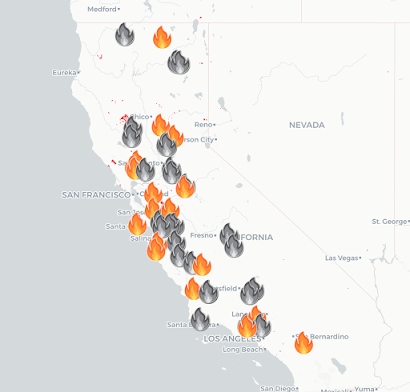 There's a lesson in all of this for writers, but I'll get to that at the end.
California is burning. There are something like 17 major wildfires that are completely uncontained.
We're also dealing with the worst heat wave in 70 years––some places are up to 110F/43C––which is part of the reason we're burning. We are one of the many vanguard faces of anthropogenic climate change in the U.S. Fire season is natural. But it gets earlier, lasts longer, and is more intense every year. I remember an interview on NPR three years ago in late October with an environmental scientist where the interviewer asked "Is this the new normal?" and the environmental scientist answered, "Only for this year. By next year there will be a new, new normal. And it'll keep getting worse."
While there are plenty of places being evacuated because of actual danger from the fires themselves, and if you recall, last year there was a week where I went and stayed in Oakland for a while, I have since moved, and my current apartment isn't likely to be in physical fire danger unless the entire Bay Area––urban areas and all––becomes a scorched wasteland. But what will get to me is the air quality, and it actually makes staring at the little words on the screen for hours and hours pretty untenable when my eyes are burning.
The fires happened last year, and at the time I picked up an air filtration system. I'm ready to fire it up (see what I did there?), but the problem is that if I close up my apartment and turn that on, the temperature will jump from about 80F/27C here in my apartment to 85 or 90+. Currently the downstairs is only JUUUUUUUST barely tolerable (if you don't move around too much) because the hot air is vented out the windows upstairs. So I'm currently trying to do the cost/benefit calculation of miserably hot against miserably smokey.
And of course....that only works if the power stays ON. We're having rolling blackouts all through the state as 1- the grid can't handle all the people trying to cool off and 2- PG&E will shut down its non-upgraded equipment rather than risk a fire that they could get sued for. (I have thoughts about non-public, for-profit utilities, but maybe another time.)

This is of course on top of the pandemic. Which provides me more than just existential dread and a deplorable dating life, but also more nannying hours than I can currently handle.

And if that weren't enough...... (This is like one of those old commercials that throw in a set of steak knives. "BUT WAIT! There's more...")  See....basically every coping mechanism we've forged during this pandemic is not an option right now in the burning wasteland that is my state. Can't go for a solitary walk––the air quality is too bad. Socially distanced lunch? Fuggedaboutit. So we're all stuck inside trying to decide if air or heat is worse and not able to so much as take a walk to stretch our legs.
Oh yeah....and it's raining ash. No, I'm not even kidding.

Now I'm in a relatively good spot, considering. I'm surrounded by industrial zones and heavy urban areas, so wildfires aren't likely to reach me unless things get so catastrophically bad that the least of my concerns is going to be my blog update schedule. The heat wave is supposed to break today or tomorrow, and then it'll be an easier choice to close up my apartment and run the air filter. I'm pet sitting a day and change this weekend for one of the few clients I kept and they have a pool (which is why I kept them, to be honest). As far as people in California go, I've got less to complain about and a lot to be grateful for.

AND YET the last thing I'm going to do right now is be toxically positive about this. This is FUCKING BALLS. It sucks. It blows. In neither case is it the good way with the eye contact. I'm kind of at ground zero in the California Apocalypse, and I want to warn you all that I might have to miss a post here and there because the world is ending in my backyard. (And me without my marshmallows!) As always I will do my best, and probably better than 99% of my readers even think is reasonable. ("Well, I set up my iPad here in the shelter because I wanted to remind everyone to vote on this week's poll, but the burning hail is fucking with the wifi, and the wall of lava will be here soon, so I have to make this short.....") 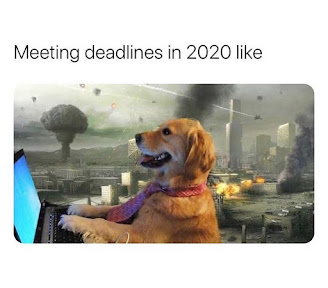 And look....(here comes the lesson I mentioned, by the way)....writers who want to be WORKING WRITERS have a needle to thread. Of course writers are human, and if you think that entire fucking laundry list of shit I just wrote isn't just GETTING to me as a human and damaging my ability to sit down and calmly clack out words for several hours, let me divest you of such a ludicrous notion. This is unbelievably difficult from a mental health perspective. More than anything, I'd like to pack up a few things and drive to Denver or something.
You have to be realistic. You have to be kind to yourself. You have to look at the fact that this is like seven things happening simultaneously, and any ONE of them would fuck up a routine. You have to manage your expectations and your ambitions.
And you have to be the one to decide what that means. No writer can be a working writer if they're not writing. (That's not really unusual to writing. If you don't do the work at any job, you probably won't be there for much longer.) It might take a little longer for the consequences to catch up to you, but you still have to find that balance for yourself. And when the whole world is burning, and you're choking on the smoke and ash as the power goes out during a global pandemic––all with the rise of fascism as the backdrop––....that's certainly no easy task.
at August 19, 2020