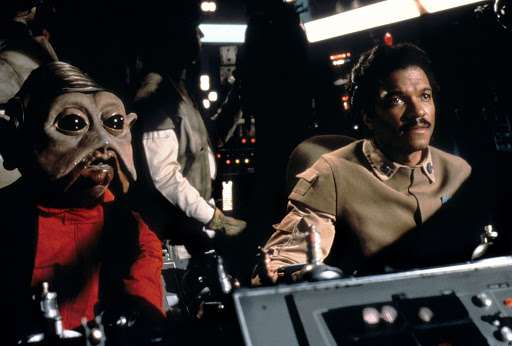 Little Tiny Lando Calrissian in my head: "Only the tiny gnawing doubts are attacking. I wonder what those unrealistic expectations are waiting for."

LTP: "I have my orders from the Emperor himself. He has something special planned for them. We only need to keep them from escaping."

Little tiny Emperor in my head: "As you can see, my young writer, your attempt to post this week has failed. Now witness the firepower of this fully armed and operational Imposter Syndrome. (into comlink). Fire at will, Commander."

LTLC: "That 80-hour-work week blast came from the Imposter Syndrome. That thing's operational!”

Little Tiny Admiral Akbar: "We saw it.  All ambitions prepare to retreat."

LTLC: "You won't get another chance at this, Admiral. We might lose patrons."

LTAA: "We have no choice, General Calrissian. Our feeble attempts at self-care can't repel work weeks of that magnitude."

LTLC: "Chris'll get that post up. We gotta give him more time!"

LTLC: “Yes, I said closer. Move as close as you can, and engage those unrealistic expectations at point blank range."

LTAA: "At that range, we won't last long against those expectations."

LTLC: "We'll last longer than we will against that Imposter Syndrome. And we might just take a few of them with us."

Meanwhile on the Centurion Moon.....Little Tiny Han Blows Up "Too Fucking Hard On Myself" shield.

LTAA: "The post is up! It's just some Star Wars parody (with self-referencing meta-humor near the end) but it technically counts! Commence attack on the Imposter Syndrome.”