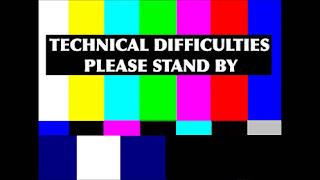 If you missed Monday's post about losing data you may not know the latest gonads slam that life has thrown at me (on top of the fires, the overworked, the pandemic, the terribad air quality and the Mordor-skies).  The facts were tucked between a sort of metaphor for how "Art" likes to kick me around and demand I sacrifice things to prove my love and the practical advice for the modern writer to simply know and prepare for the fact that their computer (and more specifically data loss) is just a fact of life to prepare for as best one can.

I spent yesterday trying to troubleshoot the problem myself (no dice), and to fire up a VERY old, very clunky, very hard to use MacAir and see if I can figure out how much was on the cloud. (More than I hoped. Not as much as I feared. A dreadfully large number of half written articles and notes which is going to be quite a setback.) Said MacAir cannot just step in either, I'm afraid. It's just too damned old. The touch pad requires almost smacking it to get a left click, and a couple of the keys are REALLY twitchy. Plus it does NOT love what modern programs ask it to do. I ride my computers hard and put them away wet. I write every day and some of those sessions are 12 to 14 hours. It's a miracle the thing still turns on at all.

A new Mac Air is ordered and on the way. They usually overestimate and adjust, but who knows with everything else going on, if I'll even get it by Sept 30th. While its arrival will not solve every problem that the death of the old computer has caused, I will at least be able to pick up some pieces and start at square ten (instead of one). Right now I'm at square two.

Still, I'm not at square one. I have a band-aid laptop. It's really more for gaming, and I hate writing on PCs because I'm a walking, talking writer cliche, but it has a keyboard which will create the wordshapes. I will start some articles from scratch and try to reassemble a few from memory. It's slow going though, so my writing is a bit like pulling taffy.

Until I get my Mac Air, expect most of my main articles to drop on Wednesday and Friday. (And more and more over at NWAW for the next couple of months as the election looms and my brain is consumed.) I imagine the rest of the days will be a combination of posts that are lower impact for me (like compilations or poll stuff) and just nothing. Empty days. I'm going to work hard to keep posting, but stack enough speed bumps on top of each other and they start to look like a wall.

I'm definitely going to need tomorrow off. Although if I think of the next poll topic, I might make a quick call for nominations.

Writing for money isn't like I imagined. It's better at times, but there's a lot of days where I feel like I'm treading water, wasting time with the not-writing stuff, or spinning my wheels. I mean obviously the pandemic wouldn't be something anybody really PLANS for, but some days I'm a little surprised at how much you have to ignore a missed post or a bad week and take it to the wide angle lens to assure yourself that you really ARE a writer, and things are just particularly shitty right now.

Hang in there if you're having trouble. Setbacks--real and terrible setbacks--are part of the cost of doing business, but writing is a lot like flossing. If you don't worry about a missed day or a terrible week, but keep doing it as often as you can, you'll still have pretty good um.......gums.

Because of all your support, I was able to just order a new laptop immediately without angst or wondering how I was going to pay rent. (It took some budgeting and saving too, but that money wouldn't have existed without my Patrons and supporters.) If you'd like to be a part of the next laptop rescue fund, please consider becoming a Patron (even a dollar or three makes a big difference), or if a one-time donation is more your style, this is my Paypal.