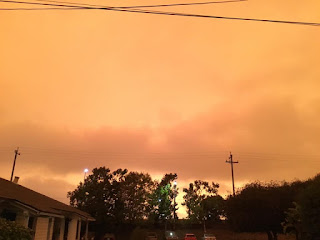 What is the best fantasy book (or series) written 2011 or later?

I know Bay Area weather isn't something most of you follow, so you wouldn't know how abuzz we've been for the last few hours, but this is the sky outside my house this morning at 10am. Apocalyptic Blood Red. You can see that the streetlights are on because it's actually about dawn/twilight dark right now. (Most of the light the picture caught is actually light pollution bouncing back off the clouds, not sunlight getting through.) Some of the official stories in local papers have even better photos, but most are paywalled if you want to do more than see the headline and pics. It's a layer of ash from the fires up in the atmosphere, and it's supposed to go on all week.

I mumbled something like "Blood has been spilled this night" in my best Orlando Bloom impression (I'm so terribly clever) and got up to go to the bathroom, thinking it was still sunrise and I'd be shuffling back to a few more hours. But then I saw 9:45 on the clock.

That couldn't be right! But my iPad said the same thing.

I don't know if you've ever experienced not being able to see daylight/sunlight, but it REALLY messes with the internal chronometer. (I can't shake the feeling that it's midnight, not noon.) Plus, the air quality is maybe not as bad as "apocalypse sky" looks like it ought to be, but it's pretty bad. [At least it's not still hot.] And I also gotta tell you, I sort of wish "blood red apocalypse sky" on my September bingo card was a joke because with everything else going on, it is really tough to just shake one more thing off and keep going. It's fucking up pretty much everyone. The sky is SO unsettling that we're all dealing with various levels of anxiety from it. Personally, I want to gather my friends like it's the last night on Earth and sing "Drink With Me" from Les Misérable. Not get to work like it's any other day.

But, HEY, that's no reason not to remind everyone to vote on our poll!

It is absolutely your last chance to vote!

Given the ONE MORE THING effect of apocalypse skies, I'm going to give myself until Friday even on one of my Facebook compilations, so these results are going to be what I post TOMORROW!  One more day to vote.

If you are using a mobile device, you can either switch to web view and scroll all the way down, but if that's not working, is too much trouble, or you're having any other issues, you can go directly to the poll through this link: https://linkto.run/p/GUDJIQEX