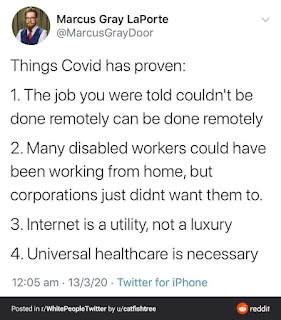 Though it's going to be a few weeks—for reasons both emotional and logistical—until the new schedule has really "seeped in," I made it to May! We're here! Vaccines in the arm. Side effects weathered. Peeps starting to hit their efficacy date. Options opening up. A second nanny to tag in on some of the hours. Schedules relaxing their vise grip.

Here is a collection of the best statuses (and a few of the most popular memes) from my public Facebook page over the period of March-16th through March-31st. (You're welcome to follow me there but read up in the Facebook FAQ [last question] if you want to send me a friend request.)

Y'all literally stopped in MID SENTENCE about the horrors of cancel culture to run and try to cancel Lil Nas X.

In case you're, like, wondering why NO ONE takes your fucking bullshit faux outrage seriously. 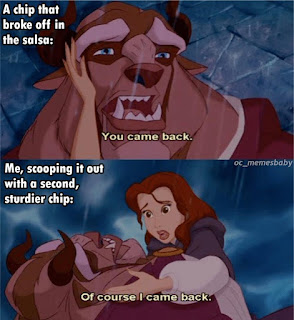 Righty roo.
I'm not going to go on walkabout on a quest to shit in other people's sandcastles about their any-excuse-to-drink-to-excess holiday attached to sort of vague secular celebrations of Lotsa-things-that-aren't-actually-other-cultures-mixed-in-with-a-couple-that-are™. Maybe this is just Irish-culture appreciation day to you, and you want some corned beef and cabbage.
You do you.
But here in my space, let me just remind you that it wasn't actually SNAKES that ol' "saint" Patrick removed from Ireland with a jaunty beat on his happy, harmless drum. Also, while Patrick lived at a time where he wouldn't have had the might to coerce or harm pagans, and may have mostly just done some slick-ass appropriation of pagan rituals in some proto-colonialism moves to make Catholicism easier to swallow, and was personally responsible for no terrible incident greater than "spreading Christianity," it's not like things stayed innocuous between those two groups.
Animals in green hats are cute tho. 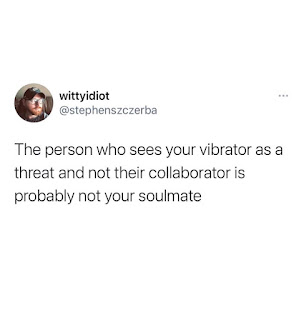 Dear cishet white Christian dudes,
You are confusing not being in hegemonic control of absolutely every possible narrative, space, conversation, perspective, social hierarchy, political outcome, economic fortune, and media representation with persecution. But trust me that some hurty-wurty fee-fees on Twitter, a movie or three starring people who don't look like you, a person who has a different truth that you can't silence, and you being down to like hegemonic control of only 90% of that stuff, isn't actually persecution. 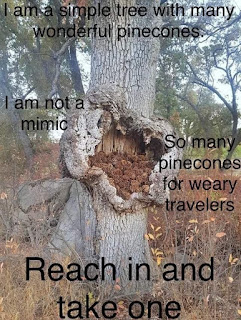 Me watching some other content generator or artist take a day off:

"Good! They deserve it."

Me watching some other content generator take a sick day:

Me watching some other content generator take a day off or cancel something because they're getting a vaccine or working on another project:

"That makes total sense. They have more than just this one thing going on. They get to have lives."

Me cancelling a blog post for literally ANY reason at all:

"I am the worst sort of imposter, and my readers hate me." 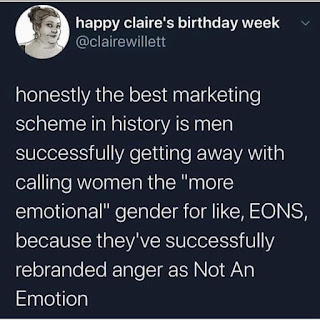 "Boomers sure are hard on Millennials. Maybe they should think about their culpability in what their kids/grandkids are doing." 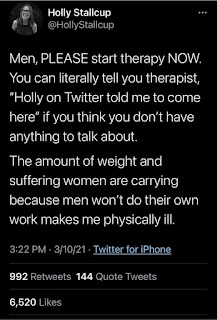 The Alt Right doesn't really believe the election was stolen, and you can tell that when you listen to them speak. (They make linguistic "slips" that someone with post-structuralist attention to language finds it piss easy to notice.)

What they are really doing is claiming to believe in whatever would need to be true in order to score points against the left. It's classic postmodern conservatism. It's basically an ongoing game of "Own the libs." They legitimately DO NOT CARE if this is true, but like most of their racist, sexist, homophobic, and transantagonistic opinions, it is simply useful to them not to really unpack their own beliefs about why they hate what they hate. 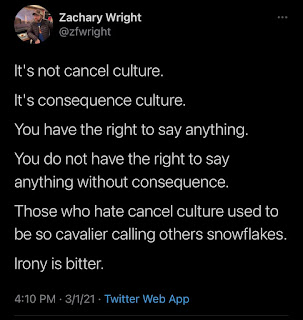 Step 2- Deny that men's anger even IS an emotion. (It's always "a justified response.")

Step 3- Call women "hysterical" for having the slightest anger at their own mistreatment and "emotional" for acknowledging they have emotions at all.

Step 4- Now they can all be dismissed as overly emotional/hysterical/out of control. And you control the narrative!

Step 5 (Very important)- Use feminizing language on any man who threatens this hegemony by acknowledging emotions, processing, seeking therapy, etc… Call them cuck, simp, girls names, whatever it takes to try to emasculate them. They are a threat to your power.

Pro-Tip/Step 6- Repeat as necessary for other intersections (race, sexuality, gender identity beyond the binary, etc…) 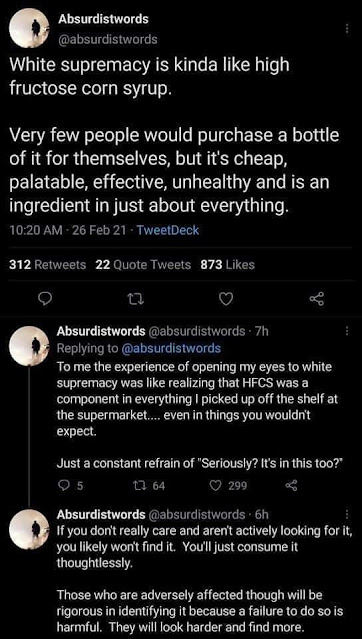 Turns out your bigotry is only MOSTLY hidden by your plausibly deniable "adjacent concerns," demonstrably false claims, and cognitive dissonance to facts.

See, what I'm saying is, you aren't really fooling anyone. If we blew you up with a bellow and pushed on your chest, you would tell us the part you know you're not supposed to say out loud. 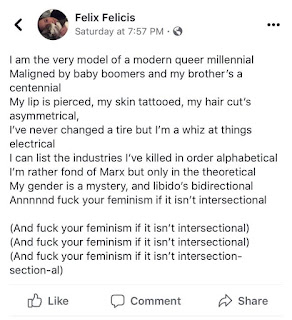 Can Shrimp-in-my-cereal guy be a milkshake duck AND General Mills is probably pushing any story (ANY story) to get the national focus off of what was—even if it wasn’t a true story—a gaslighting, abysmal response?

Can the world have enough nuance for TWO assholes? 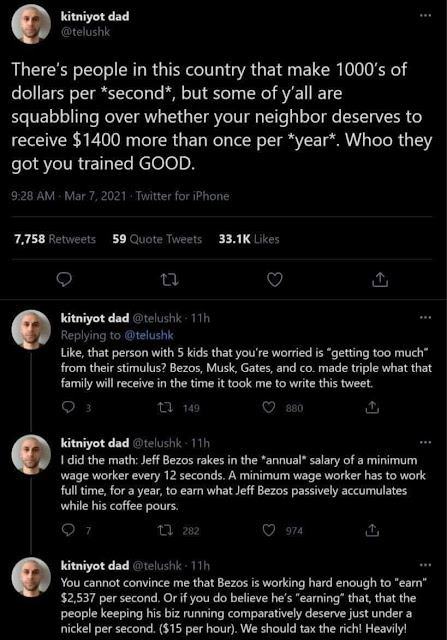 Chris's Pass/Agg theater of the day:

Oh, Sweetpea……I'm not talking about THIS mass shooting. I'm talking about the one that is juuuuuuuuuust on the other side of whatever imaginary "How-can-you-talk-about-this-so-SOON?" Rubicon that is in your head. Is it a day? A week? A month? It doesn't matter! Whatever the time table is, there was a mass shooting just before the most recent one.

THAT'S the one I'm talking about.

I'm a theoretically-radical leftist. I don't have a problem with "guns." But maybe the best day to have the conversation about how easy they are to procure and where might be an actually reasonable line between colonial era muskets and civilian-owned rocket launchers was actually last week. 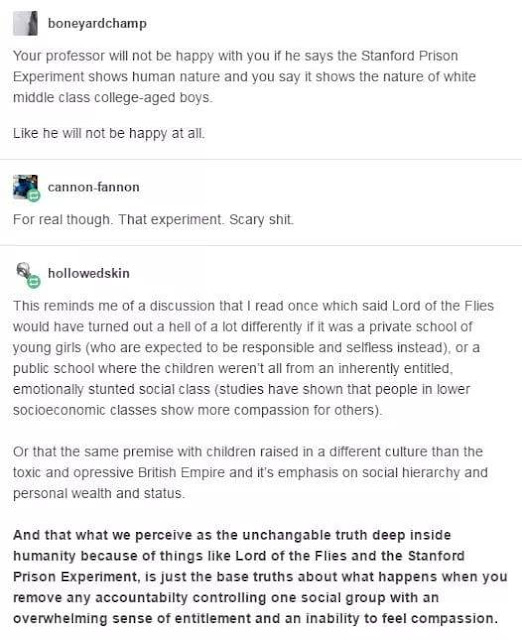 When someone says, "Sharks attacked me so now I'm profoundly hydrophobic," you seem to understand that you don't need to jump up and say, "not ALL water!"

You don't interrupt someone telling you about how the birds at the beach stole their fries with "Not ALL birds act like that!"

If I say, "I love ice cream," you don't feel a need to point out that because I've never tried pickle garlic nutmeg licorice horseradish flavor, and would likely hate it that ~clearly~ "Not ALL ice cream!"

Perhaps most telling, when I say, "Men can be wonderful parents," you do not jump up and say "Not ALL men!" Though that would certainly be an actually appropriate place to do so. But in this moment, you seem already to understand that ALL men everywhere are not what’s being discussed.

What I'm saying is that your sudden inability to tell the difference between metonymy and synecdoche when talking about ubiquitous and cultural problems caused by gender inequality versus an actual hasty generalization that gets applied to marginalized groups to villainize them isn't nearly as slick as you think it is.