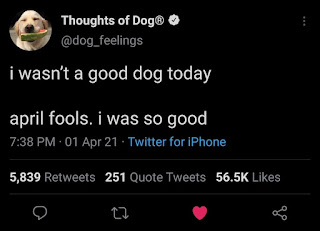 The new schedule is starting to take effect, although it's a bit of "two steps forward, one cliché back." My clients' cycle of payroll is still a thing (this is the ON week), and it will be some time before the other nanny is able to take on enough hours that we can fully be back to pre-covid schedules.

Here is a collection of the best statuses (and a few of the most popular memes) from my public Facebook page over the period of April 1st through April-15th. (You're welcome to follow me there but read up in the Facebook FAQ [last question] if you want to send me a friend request.) 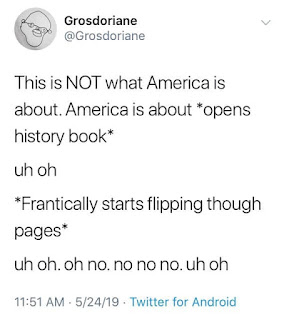 This meme doesn't apply to me directly and my specific situation, so I will refuse to see its use to anyone ELSE or society at large, and will shit all over it in your comments without the slightest nuance, concession, or contextual allowance. 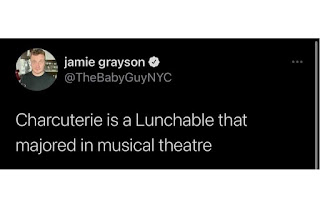 A four-year-old memory referencing the outcry against the accent of Star Trek Discovery's Captain.

I don't know what the problem with a Chinese/Malaysian accent might be, but I'm pretty sure it rhymes with shlacism. 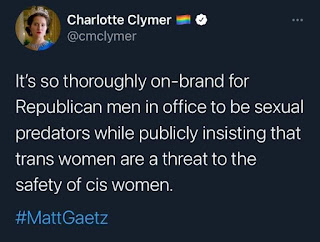 The J&J blood clot pause (six/seven —depending on the source—cases out of 6.8 million administered) is why I don't believe any of these stories about terrible causal insta-deaths happening because of the vaccine. Especially not somehow observed by some single healthcare worker. ("Oh the things I've seen….")

That's just antivax nonsense trying to hide behind the social contract that you don't call people liars to their faces, and that health care workers have the inside scoop. You'd do well to ignore such stories as the manipulative lies they are.

It would be the headline for ten news cycles if anything even LIKE that happened. It wouldn't come off the front page for a fortnight unless we went to war. One in a million and it's news. And there's a pause. And people are worried about confidence. And people are going to check to be SURE.

No way these other stories are even PLAUSIBLE. 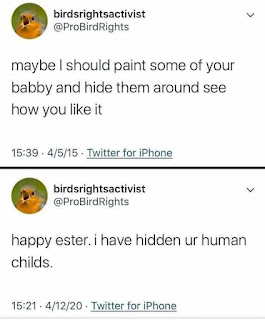 Abuse comes in a lot of forms and 31 flavors, and sometimes it's not even abuse—it's just a trauma response of one person that perfectly hits the abuse trigger of the other, and they will just be toxic to each other through no fault of either.

The first thing an abuser will do—the very first thing—is make sure their behavior looks like ANYTHING other than abuse.

Me vs. Supernatural ghosts.

"So now you know why I carry around these lengthwise halved hula-hoops. Just stick those suckers down OVER the salt ring, and tape them down, and it won't matter how windy the ghost makes it. Saves a bundle on being-thrown-into-walls medical bills, lemmie tell ya. But just in case, you'll notice I am wearing pads and protective gear, especially along my back. Too many baddies with telekinesis running around.

Oh, and this little bungie cord keeps my iron weapon (that I keep with me instead of looking around for only once I've been attacked even though I know I'm hunting a ghost) from being yanked telekinetically out of my hand. LIFE SAVER.

"You have to be smart about these things." 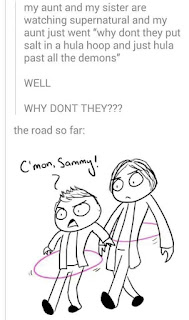 Protip: Being SO odious and repugnant that no one wants to talk to you and they leave isn't actually the same thing as "winning" arguments. 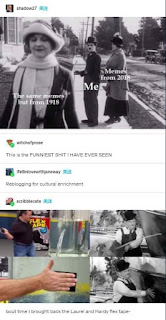 Based on a close read of a Duran Duran song, I have determined the following about Wild Boys: 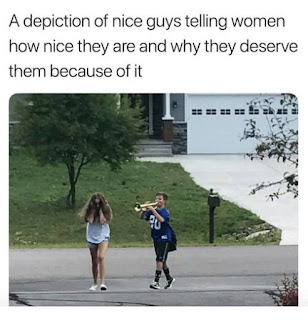 Me: "I have a hangnail."
Web MD: "Stage four eponychium cancer. Get your affairs in order." 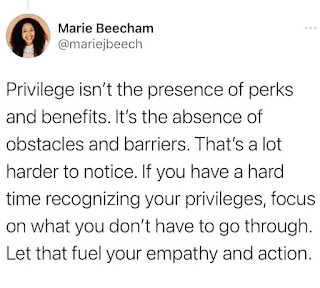