Types of Dialogue (The Very Basics) 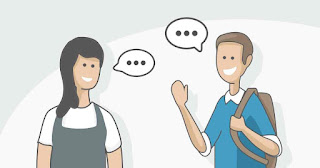 There are many ways to break "dialogue" into various subcategories, some of which we will do in the follow-up craft article, but in order to set that up, we first need to break down dialogue in its most basic form—its level of directness—in order to then analyze the stylistic choices of each. However, it is useful going forward to know that each of these respectively conveys less narrative distance. From this perspective, the types of dialogue are summary, indirect, and direct.

Please note: this is not a primer in how to use quotations in cited works. That involves making it clear what the source is, usually some kind of foot- or endnote, and rules that vary depending on whether you're using APA, Chicago, MLA, or what. This is about dialogue in fiction.

Second note: In the examples below, if it doesn't have an attribution tag, I made it up.

Summary- The most indirect form of dialogue is summary. It allows a writer to condense a lot of conversation into a few lines.

They talked for hours, discussing the different branches of philosophy and delighting in the other's views of how metaphysics shifted so dramatically when the tiniest changes were made to epistemology.

In the early years, they spoke incessantly of their someday-vacation. Where they would go. What they would do. How they would maximize each day. Friends upon whose hospitality they would impose to save a few dollars. Over time, they spoke of it less and less, until one day Jerry couldn't even remember the last time it had come up.

The group strategized into the early morning, proposing and throwing out one idea after another for how to get past the indomitable walls of the outer keep.

Indirect- Indirect speech is a bit of a hybrid between direct and summary dialogue. It is reported by the narrator and carries the feel of the exchange, without quotation marks and the actual words of everything being said.

My doctor told me to try yoga. I told her yoga was not an answer to problems that required medication. She smiled and said she'd be happy to write me all the scripts I wanted…after I'd tried yoga in good faith first.

Would I please open the door for her? I would, but not if she was going to sound so entitled about it. What was my problem? My problem was that the day before she had sniffed derisively when I tried to open the door; maybe she didn't realize that was me. Did I think maybe the difference was that yesterday I was couching sexism in gallantry and today she had her hands full and was a human in need? That was ridiculous—I am the least sexist person I know. Forget it; she would get the door herself.

Mike said that he was hungry. Jane asked what he would like to have for dinner. They settled on Thai food.

Summary and indirect speech are great ways to get quickly to the central tension of a scene, or portray a conversation that goes on at length or becomes tedious—without writing the entire thing out and dragging a reader along through the tedium.

Direct- Direct speech uses quotation marks and contains the exact words that were spoken. In fiction, MOST of the time when the dialogue contains the possibility of decision or discovery (drama, basically), it will be written in direct speech/quotations. In fact, be very careful to avoid summary when the reader will most want to experience the drama of the dialogue. (Such as: During that long night sipping cosmopolitans and speaking of the forgotten dreams of their 20s, Winter realized she was falling in love. —this can be earned [though not easily] but it is TELLING the reader instead of letting them come along and kind of fall in love too.)

"I would like to be informed about any future lapses in your judgement prior to being informed of their consequences," John said.

Combinations- Of course these three forms of dialogue can be used in any combination.

She asked me if I'd like anything to drink. "Vodka martini," I said. "Stirred. Not shaken." (Indirect/Direct)

We reviewed our plans until we were certain we had prepared for every contingency. "What if we get busted by the cops?" Derringer brought up. (Summary/Direct)

"You will be tested to your limits," the instructor said, launching into a lengthy description of how hard his class would be. (Direct/Summary)

"I would like to see a dessert menu," she asked. She informed me that she had once had a decadent flourless chocolate cake that tasted just as good as a regular one at Skipolini's when Jeff had taken her there for THEIR first date—but of course this place was not as good as that one. (Direct/Indirect)

I remember we talked for hours about topics ranging from movies with more nostalgia than hold-up power and reaching all the way to our plans to travel. Our voices grew softer. Our pauses longer. Our conversation grew more and more intimate. What did I regret she asked me. I told her that I regretted the love I'd let get away before I knew what love really was. I thought real love would always be effortless. She laughed but nodded. "We are two peas in a pod," she said. Our eyes met each other through a long silence. "To never missing love again," she said pretending to lift a glass and yanking her eyes away from mine.  (Summary/Indirect/Direct)

Though there are lots of philosophies of dialogue and ways to approach it from a craft standpoint, it is important to know the very basics before getting into that level of detail.