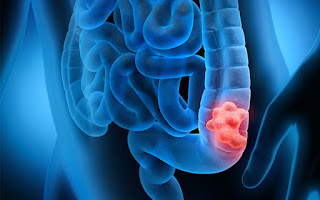 I had originally intended this for Thursday's post, but recovery is a non-linear process and some days sap my energy more than others. I'm definitely getting better, but (especially last week) I would do one thing and be kind of wiped out.
So in lieu of writing ABOUT WRITING, today I'm just going to tell you about my cancer journey up to this point. But I do have an insight towards the end for those who are hoping to make writing pay the bills and who want nothing more than to "make it" by some value of that that might include losing the day job. Maybe not a didactic insight. Certainly not for everybody. Might make a few of you flip some tables. Still…something I noticed nonetheless.
If you're just tuning in, a routine blood test found anemia, and the further they went, looking for the cause, the more obvious it became that something was very wrong. A colonoscopy turned up a mass and pathology said, "cancer." Colon cancer.

The next step was surgery.
Okay the NEXT step was to set up a group on Facebook for butt-themed memes called Chris's Butt Stuff, but, you know….THEN surgery.
It's difficult to describe just how unpleasant the ramp up to something like this is. Imagine having to rewatch Lost for the third time but you only have a bootleg recording where the audio cuts in and out, and the picture is grainy—except somehow the smoke monster makes even less sense and the time travel plot is even MORE convoluted. Every week was two or three major appointments, and tests just kept getting added. I got poked and prodded and had to fast beforehand, and drink this awful stuff that is a powerful laxative. It was invasive and violating and even though I knew I needed it, it was one of the worst stresses I'd ever been through.

December 16th, they cut out a softball-sized mass along with a little over a third of my colon*. There were no complications that would have caused the surgery to be abdominal (rather than laparoscopic). Other than being bigger than anyone expected—it was hidden in a corner and even fooled a CT scan—it was a textbook procedure. The tumor had perforated the colon wall but there was no lymph node involvement. I don't know much about classifying the stage of cancer, but this is technically 2B according to the oncologist.

[Ed. Note: "No, Chris. You have a 2/3 colon.]
Right now I'm waiting for a genetic test to find out if I have something called Lynch syndrome. I have two markers for it (and the tumor kind of behaved like I have it as well—a local super-asshole tumor but without much spread), but a genetic test is required to confirm. If I've got it, there is no benefit to be gained from chemotherapy, and recent studies show it would actually make for poorer outcomes. If I don't have Lynch syndrome, a type of chemotherapy called 5FU is up next. 5FU is kind of well tolerated as far as chemo goes (I might not lose my hair), but it's still pretty rough. Going on the easiest chemo is kind of like facing off against the LOWEST ranked heavyweight boxer in the tristate area. You're still going to get your ass kicked.
Beyond that there's the original anemia and low platelets. My CT found some scarring on my liver, which is weird since I can count the number of drinks I've had ever without taking off both socks, and I've never had hepatitis. And we have to figure out if surgery solved all the original problems of anemia. It's possible that even if that was the underlying cause of everything, I might need another iron infusion to bring my numbers up to where they belong.
So there's a lot more to come.
But the main thing is the genetic test. That's going to determine what's next.
Moving on to the not-for-everyone-so-don't-flip-your-perfectly-good-table point.
ONE interesting thing that I kept hearing from people as it became clear that I was going to have to take some kind of break from blogging is that there were more important things than writing.

But….also….
Obviously, there are more important things than writing (I swear), but for me, writing is way way way up there. I wrote the day of my surgery. I wrote the day after. I've written every single day of my recovery. (It hasn't been blogging under deadline, and it would be maybe an hour instead of five or six, but I wrote every day.) I can't imagine a life without writing. Sometimes things that are urgent crop up and I have to give priority to them over writing, but urgency and importance are different. A pot boiling over is urgent, but cooking your world-famous bolognese might not be more important than the argument you're having with your partner about your future together. You get the pot off the burner because you don't want the house to burn down (URGENT), but then, hopefully, you make a choice to let the meal go and focus on the more IMPORTANT conversation.

And if you turn back to your bolognese and tell your partner to just calm down for a damn minute while you finish cooking the entire meal, you're making a decision.
And I'm struck again by how often I run into people who burn to "BE" writers, but do not make writing a priority in their lives. You don't necessarily have to give up a well-paying career or a social life or having kids or all your personal time, but you probably have to give up SOMETHING if your goal goes beyond being a contented hobbyist. You maybe don't have to reach for the computer the day after major surgery like some (AHEM), but if you take a couple of months off, waiting until you are absolutely fully recovered before you sit down to type a word, there's some information there about how much writing means to you and how much you want it in your life.

There are more important things than writing. Overall health is more important, and if the doctor walked in and said, "Chris, I'm sorry. If you write, the creative power of magical rainbows will melt your sutures, you will go septic,…and DIE," I certainly would have taken a break. And there are definitely things (like doctors appointments) that will be more urgent on a day-to-day timeline.
However, it is also true that we create lives that reflect our priorities one decision at a time. And if there are too many more things in a life that are constantly more important than writing, our lives will not fail to reflect that. There will always be something. It'll be an endless cavalcade of "I have to do this one more thing, and then I'll get back to writing." This isn't a value judgement (you should probably prioritize a family if you don't want to be a shitty partner/parent, and surviving capitalism is pretty important), but it is simply a fact. I am no different than anyone else—if I prioritized writing my novel over other parts of my life, it would be done by now. I am constantly waiting for one more thing to get better, and I have placed priority on other things. I wanted a social life. I wanted a love life. My novel remains unfinished. My life reflects my priorities.
When an urgent issue clears, a high priority will float back to the top almost immediately. A lower priority will remain low—perhaps only to be given attention when EVERYTHING else somehow requires no attention at all. And how often does that really happen?
If it doesn't float to the top, there were other priorities there.
So I can't tell you where you land, and there's no right answer when it comes to your own relationship with creativity and expression, but FOR ME, it is perhaps more accurate to say that there are more URGENT things than writing, right NOW. But the importance of writing never faded, and as soon as the urgency wanes, the importance of writing will reassert itself in my priorities.
A lot of people ask me how they can make it. (Actually, that's the most common question working writers get—how their success can be emulated.) And a lot of people asking the question are looking for something more complicated (yet easier to do) than, "Write every day." But perhaps "Write every day" is just the praxis for a broader idea that is better expressed by, "Make writing one of your very highest priorities or your life will reflect that it isn't."
at January 10, 2022