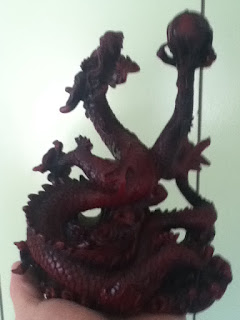 Getting Cathamel to sit still long enough to snap this picture was actually a little like pulling teeth. Not the teeth of little kids who are dreaming of quarters either--I'm talking like the molars of adults. That's why the picture is a little blurry. I was shaking and trying to hold her still. She is self-conscious because she hasn't been dusted in a while (really dusted with q-tips and oil) and because she insists that the pose she has to freeze into in order to look like she's just another dragon from Chinatown that I'm anthropomorphizing is one of her less-cute positions. Cathamel is a little on the vain side, but I'm not going to talk much about that because she knows everything I ever write even before I've actually written it, and because she breaths fire. Fortunately, after a long struggle involving tarragon, most of the fingers on my left hand, and a can of chili I got her to stop squirming long enough to aim my iPod at her.

Cathamel is my muse. I'm not sure why other people get pixies with sparkly dust, and I get a no-nonsense dragon with an uncanny ability to bite Achilles tendons, but as she informed me, we don't get to choose these things. I thought I was just buying a cool dragon carving from Chinatown, and then it started asking me weird questions about my word counts. Cathamel's most annoying trick is to wreak havoc on the house, knocking things over, chasing the cats, burning the curtains, and then when someone other than me comes in, she goes back to looking like a wooden sculpture. It's like that Loony Tunes with the singing frog. Except with burn-care kits.

Cathamel has been a muse for a long time, and will be around long after I'm dust to inspire the next generations of writers. In fact, she's so old she was named after the original Greek muses, her name being an amalgamation of the three muses whose inspiration would relate to writing. She says she's inspired some writers I've even read before, but that's not something personal muses are allowed to talk about, so she can't name names. She picked me in my late teens when I had so much promise and drive, and has spent the last twenty years doing that slow head shake with the index and middle fingers of the right hand on the forehead ever since. Apparently once a muse picks an artist, they're sort of stuck with each other unless the artist swears off the art completely. Since I've never stopped writing, Cathamel has had to hang around. I've been a little disappointing though as an artist. Muses don't just inspire artists, they also feed off of their creative ju-ju. So she had to eat the equivalent of celery with low-cal cream cheese every single meal for years.

I'm pretty sure that's why she took corporeal form instead of just going on being a personification of a cerebral concept. In her dragon form, she can also eat my flesh--which she threatens to do....in grisly detail....at length. Ever since she's been an actual thing living on my desk, I've had to keep up the ju-ju or she threatens to take a bite out of me. Some people get loving muses who cradle them and sing the inspiration into their imaginations. Mine tail whips me, smacks me around with her wizard's ball (much heavier than it looks), curls up on my head, and talks about how painful humans find hair immolation. She was tolerant of smaller meals and expository essay ju-ju (the muse equivalent of alfalfa sprouts and dry tofu chips) while I was still in school, but I have been informed that if she is not the beneficiary of three squares a day of gourmet creative goodness that she is going to use all her musely power to inspire me to leave the house naked and then give my loved ones cigarette lighter shaped burns while they sleep so that I end up in prison for torture. After that I kind of stopped listening because I was getting to work on my fiction, but there was something about how easy it is to inspire someone to drop soap.

I'm kind of her butt-monkey.

But...every once in a while, when I'm writing, and she's enjoying the equivalent of a creative Value Meal-Go Large, she leans over and whispers something in my ear that is SO perfect for what I'm doing that I can't help but think that I have a pretty good thing in her. And even though I'm probably going to have my earlobe char broiled for saying this, sometimes I wake up at night and she's snuggled into the crook of my arm, her little hands clutched to my pajamas and her nose pressed to me, and I realize that an ass kicking, not-gonna-take-your-bullshit muse is exactly what I need, and that her tough love is the most sincere inspiration I'll ever get.

Still, every once in a while, I get this horrible feeling that Cathamel might have had something to do with Sylvia Plath. Not the way she died, mind you, just her in general.