Vater Unser: The Rhythm of the Words 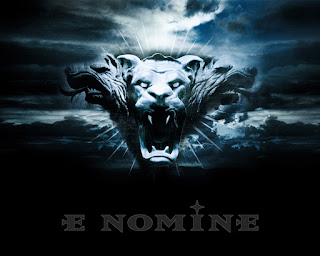 I really love this song, and I'm quite despondent that even nearly a decade after I first heard it, I can't get it on iTunes--well, not in the US anyway.  In fact, iTunes doesn't really carry anything from E Nomine....because they're horrible monsters.

It always makes me want to write about a very specific character--unsurprisingly, a sort of kick ass priest type.  At the time I heard it, it became the theme song for my priest-mage-psionicist in a friend's "one-of-the-best-I've-ever-been-in" Dungeons and Dragons game.  But even after that game found the limits of the Dungeon Master's enthusiasm to continue running it, I continue to want to bring a character like that to the page whenever I hear this.

Mostly though, I remember how characters need to be competent (and oh, he was) to be good characters, but also have their glaring weaknesses (and oh, he did).

I can't even hear the intro prayer part without starting to feel my fingers twitch for a keyboard.  I love the thumpy rhythm and the way the words cascade over them (even though I can't understand them).  Music has always been a very important part of my writing process, and this is like pure intravenous inspiration.

Except, you know...in song form.


Hopefully someday iTunes will fix their licensing bullshit.  I'm really not into stealing music because I'm basically an artist in exactly the same position and I wouldn't appreciate very much being stolen from or having my work pirated.  But DAMN I want this song on my iPod.
at February 02, 2012