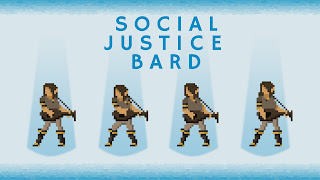 There's a part of me that sort of wants to completely flip the script of the "logical and rational" actors in social justice discussions.

You see, we place a "value" and a "high ground" on the rules of discourse that in many way reflect the power dynamics of the larger society themselves. Being emotionless about a topic makes you seem to be better able to speak about it because emotions are thought to cloud your ability to be rational. People who don't experience something are thought to be the only ones who can be objective about it. Women, for example, can't talk about workplace sexism, because they are not objective. Only men are considered objective enough to tell them what they experience isn't really misogyny at all. Black people can't talk about racism because they have a "chip on their shoulder" and white people need to explain to them that though racial inequality exists, somehow no specific example they bring up is ever really racist.

See how that works?

What if we could completely flip that script? What if the value and high ground could be placed on emotional investment and critical thinking that involved listening to the stories of people who have directly experienced something. (And while my examples will be "men" and "sexism" this can really work with any kind of social power dynamic in our society between the powerful and the marginalized.) If we imagined this, what would it look like?

Like start ridiculing men who are "impartial": "It's clear you don't even care about this. Why should we listen to you? You're completely uninvested."

Berate men for having NO vested interest in women's issues: "How can you be objective when you're not even a woman. Clearly not being affected by this creates an unsurmountable bias."

Dismiss "logic" that ignores subjective reality: "It's clear that your logic hasn't progressed beyond the freshman survey course if you think every linguistic shortcut about what "men do" is open to hyperskepticism and "fallacy whack-a-mole." So the complexity of this discussion will obviously elude you until you have a deeper sense of critical thinking and how humans who aren't writing syllogisms actually interact with each other."

Discount their contributions if they are uber-objective and kick them off of threads if they continue to do so: "I'm sorry. I simply can't take this lack of passion and empathy seriously. You are just making your argument look so bad." (Later) "If you're wondering why you're being kicked off this thread, it's because you're talking about major issues of misogyny and the humanity of women like they are mathematical proofs. No one who can be so emotionally detached from the issue belongs here. If you maybe had a slightly less disinterested tone, I might be willing to consider your points."

(For bonus points, if they persist, start holding their past behavior against them: "You clearly have a problem with being unable to invest in this as an urgent and critical issue. I've seen you be totally cold on several threads. It makes it really hard to take anything you say seriously.")

Of course emotions do have the ability to cloud clear thinking and we would acknowledge this in our new world–conceding examples of red-faced, furious creationists or white nationalists whose emotions have blocked all paths to sincere self criticism. Naturally we would argue about the epistemology of emotions, just like we do the sources of "rational facts" today. But most people who show emotions would simply be thought to be invested and you wouldn't trust anyone who was disinterested.

Point out how irrational it is to eject half our thought process from thinking about issues that concern us deeply: "You're trying to separate reason from emotion. How can we trust your perspective as accurate when you make such an effort to compartmentalize mental processes as though they're not completely interdependent and dismiss everyone who does not? That is completely unreasoned thinking."

Mock their lack of commitment: "You don't talk about this incessantly. Are you some sort of dilettante or something? Why should I listen to anything you say if you're not constantly getting educated and struggling. Pfffft. Get the fuck out of here, you tourist."

Point out studies that show how unable they are to speak on matters: "There is research on how being in a position of power makes you ignore details. So men are not objective when they speak about women's issues. Men are utterly biased. They should acknowledge those filters and let women do most of the talking. And listen."