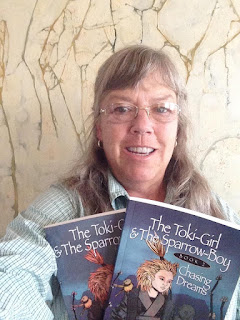 I’m just over 8300 words today on the first draft of Book Three of The Toki-Girl and the Sparrow-Boy series.  I know where I’m going for the next 8,000 or so and I’m tickled. Now, it’s much easier. Even when, as the fox-woman did today, the characters take over and lead me somewhere else, it all falls together. I see the scenes scroll though my mind. I know I’m in draft mode because I write pages of dialogue and almost no description, though I see the scene. When I rewrite, I will expand on character action and reaction, insert setting, scenery, season and specifics, adding a very necessary layer. Too, that will add to the word count in a useful fashion. There will be massive cuts — there always are — so it will even out. I don’t have to worry about word count for its own sake now. More scenes and words will appear as the story develops. It will grow and change almost organically under my hands. It’s a magical feeling. Oh, I sense a potential continuity problem that will need tweaking, and I do have a practical paradox looming in 10,000 words or so. It’s tough being a legend in a world that doesn’t believe in you!

I am having fun.

The days I spend wandering around crankily thinking about "what happens next" are the harder ones. Mostly it’s my subconscious working, which means forcing it isn’t possible. "What happens next" has to simmer on the back burner, like a chili or soup working away on a wood cookstove. Those are days to walk, to bake, to boat, to ski, and talk to nobody human. This is when I start reading cookbooks and re-reading mystery series I know almost by heart. Those are days to let the mental silence reign, so my mind can work in ways I don’t consciously perceive, though I can feel them bubbling along underneath. Finally, at last, the light dawns. I know where the next scene starts, and the general direction in which I am going. I can play my keyboard like a musical instrument, as the words fly out of my brain and onto the page. When this happens, I can’t wait to get to my computer. I can’t lose this. I have to get it out and down to make room for the rest that’s just waiting to flow. My writing, like my workout (which I won’t do unless it’s fun), is a task I often schedule as a reward for getting my chores done. I did that yesterday, spending the morning cleaning the house, writing blog posts, and so forth. I’m always excited at this point, so chores go quickly. There’s no procrastinating now.

Yesterday, I happily settled down, chores done, to work on Book Three. I’d barely opened the file when Aaron Cat brought in a bird and let it loose. I am pathologically afraid of birds flying into my face, so you can imagine my reaction. Yes, clinging to the ceiling by my fingernails just about covers it. I tossed the cat outside, closed the door, and called a neighbor. The bird was loudly alive and sounded uninjured. Aaron is not that great a hunter. When he catches something, it’s mostly alive and healthy so it can be rescued. My neighbor came over but the bird was silent. We looked everywhere. No bird found. I blocked off the room as much as possible and opened the front door. I took Sally, the dog, out. On our return, she, true to her poodle heritage — they are water retrievers — located the bird hiding in the stacked firewood. The bird vocalized, probably telling her to get lost. I now knew exactly where it was. My neighbor returned and dismantled the wood pile, actually getting a sighting. A single layer of firewood covered my newly cleaned floor. But we saw no bird. This saga continued through two more attempts, the rebuilding of the firewood stack, and three other neighbors. Sally focused on a particular potential hiding place enough to rouse human suspicion, but no bird. Telly, the Shiba Inu next door, focused on getting to Sally’s food. No bird. Was it possible it actually left on its own? Eventually, I had to bring Aaron, the cat responsible for all this turmoil, in for the night. I had to to close the outside door. I retreated to my bedroom, door closed, expecting to wake to carnage.

Nothing. Perhaps the bird really did leave on its own. There’s no sign of it and neither Aaron nor Sally are interested in looking for it. I have cleaned the floors anew. Unstacked firewood makes a huge mess. The bird doesn’t seem to be anywhere in this house. I hope it’s outside, happily being a bird again, albeit one that’s a little more careful of large black cats.

The take-away points are three. First, don’t worry about having a short word-count at the end of your first draft. NaNo aims for 50,000 words. An adult novel is half again as long, at minimum. First draft is a time to plow through and get the story down, to turn the ephemeral into the physical. Don’t go for perfect, go for the line from the beginning through the middle to the end.

Second, while I strongly believe in writing consistently once I begin a first draft, sometimes writing isn’t in front of the keyboard. It’s silencing your mind and letting the process flow. Just make sure you’re doing that, and not drowning the process in conversation, drugs, liquor, sex, a new book, a new band or any other distraction, or bashing yourself because you’re not at your desk with words pouring out. Honor this part of the process; give it a chance to work. When you recognize that this is part of the creative process, it’s possible to plan for it.

Third, except when it isn’t. Life happens. Life gets in the way. The absolutely only way to deal with this is to recognize your art, your writing, is your priority and step back on the metaphorical horse and ride on.