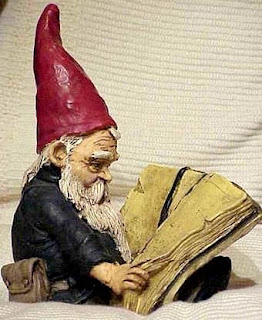 Hello there you fine, fine readers of Writing About Writing.  My name is Twizzlefizzlepop and I'm a 85th level Gnome.  I once called myself a pimp but it turns out that's a little on the misogynistic side so now I'm a Recomendificationer.


You might be asking yourself what the hell I'm doing here on Writing About Writing.  Well, I'll tell you.

Somewhere around level thirteen, when I was spending talent points to reduce the cool-down on my "Backhand Slap" ability, I discovered a bit of a problem with my choice to be a book "pimp."  See, I'm a feminist.  (In fact, I've changed the name of that particular power to "Back Handed Compliment of Doom" because I don't like the linguistic patriarchal overtones that a woman can't even set reasonable boundaries in her life in a way that is considered bold or assertive for men or that any level of physical abuse is okay whether it is back handed or not.)  I have the radical assumption that women are equal.  I've been pwned by way too many pink pigtailed Necromancers in Warsing Gully not to know that.

So I decided to recomendificate books instead.  Don't worry, I won't recomendificate classic literature. I did that back when I was taking candles from Gnolls near my starting city. And pimping out a book that's all the rage or has been made into a movie is no more a challenge than killing 50 Young Tigerlings for That Ernest Hemingway Anagram dude. No, I need more of a challenge. I'm going to recomendify books you may not even have heard of.  New books.  Unsung books. Debut authors. Books that are worthy of my level 85 recomendificationizing skills.