If you follow this blog at all, you know that my life changed just a little a couple of years ago. That's when The Contrarian showed up with a psychic wail of "I am NOT!" and filled our lives with unbelievable amounts of love and poop.

T.C. didn't just soil more diapers than I knew ever existed in the history of diapers. He didn't just teach me new strata of sleep deprivation for which no finals could have possibly prepared me. He didn't just reveal to me that there is a frequency of sound at which my resistance shatters and I am willing to listen to "Let it Go" for the thousandth time (or Nyan cat for another hour) for just the chance at reprieve.

He took me back to the fountainhead of so many artistic principles that I had forgotten, and reminded me that being an artist and being a child have, have always had, and will always have, an intrinsic connection that even the best artists forget from time to time (and the midline mediocre artists like me forget constantly).

Or maybe I've been blogging way too long and I'm starting to see the whole world in terms of listicles.

I started this article a few months back, and since then, T.C. has gotten much better at tottering around, but when I it first started forming the proto version of this post, he was only a few weeks out from his "butt scoot" (he never got the hang of crawling). He would fall all the time.

Sometimes he would just be standing there, and just.....fall. He would just fail to stand. It was like someone cut the strings of a puppet. Can you even think of the last time you saw someone (who didn't trip or get knocked over) just fall.

But here's the thing. He didn't even pause; he just got right back up. It wasn't a thing. He didn't doubt himself. He didn't wonder if he should be walking at all. He didn't feel bad. He didn’t question whether learning to walk was worth it. Falling was just the cost of doing business.

He still falls and just gets right back up. No moment of self loathing. No internalized doubt. No existential crisis. Just “Oops. Fell. Oh well. Back up."

2. There's no reason to do it if you're not having fun. 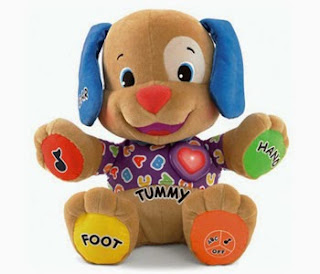 T.C. learns so much in an average day, I can practically see him picking up concepts and getting things in real time. Neural connections are forming left and right, and you think he's not even paying attention and you turn around and he's figured out how to turn on Daniel Tiger for himself or is "tricking" you into reading his favorite book for the tenth time in a row. (Seriously he goes over and pretends to get a new book and brings the same one back.) A couple of days ago I watched him realize his singing dog had more "triggers" for songs than just its heart. And he went around looking for all of them and delighting in getting to hear the new songs.

The thing is, T.C. does exactly nothing that he's not into. If you try to show him something that isn't interesting, he walks away–or more recently, he knocks it out of your hand and says "Buh bye." He turns the TV off in the middle of anything that isn't Daniel Tiger or Dinosaur Train. He has precisely no time for your shit. If it doesn't excite his interests or compel his passions, he's out like trout. T.C. never sits down and says "I need to learn how this works,” or “I need to make another three thousand neural connections before naptime.” He sits down because it's fun.

I know some artists have dreadful compulsions that they don't identify as "fun" per se, but no matter why you're scratching that itch, there's no reason to do it if it's not something you want to be doing. T.C. helped me to remember that I don’t wake up at four-thirty in the morning for money or because I have to. I love it.

When Contrarian dances, he just sort of bobs to the music. Like, he kind of bends his legs a little an wiggles his butt up and down by bending his knees. It’s out of time. He has just the one move. He keeps going for ten or fifteen seconds after the music stops. But the whole time he does it, he’s giggling. It doesn't even occur to him that he's going to make it without making a mistake. He jerks, twitches, trips, falls, and sometimes face plants.

When he eats with a spoon, he can get about half the food into his mouth on a good day. When he tries to fit the shape into the shaped hole, it takes him ten tries. When he draws, he might do a line or three before he eats the crayon. When he plays with Duplos, he can't even push the blocks together so everything just falls apart at three or four blocks.

It never even crosses his mind that he should be innately good at anything. He recognizes that sucking is just part of the process. He tries and gets better because he’s happy to fail. He doesn't spend a bunch of time frustrated because things aren't doing what he wants them to. He just keeps trying until he gets it or fails.

4. Stop and notice things. Everything is new.


You know what T.C. thinks is interesting? EVERY FUCKING THING. The tiny Christmas tree we set up this winter. Really big trucks. Really red cars. Any car regardless of its bigness or redness. (He says "Ca! Ca! Ca! every time he sees one.) The credits for a show he’s never seen before. Signs. Elmo. Super Grover 2.0. His socks. His shoes. My socks. My shoes. The mural on the side of the hospital wall. A strangely shaped hole. The way the light streams through the window stencils. The way the light streams through the OPEN window. Water that is pouring through a water toy. Water that is coming out of the faucet. Water that is just sitting there in the cat bowl.

Everything in the world is new and exciting. And that's exactly the mentality an artist needs. Seeing the world through fresh eyes like you're experiencing the most banal moments from a fresh perspective is actually a fundamental part of what artists DO.

Even more than some "artistic rubric," that maybe helps me be a better writer, T.C. has reminded me how to see the world again through fresh eyes, and to see everything as fantastic and magical again. Because Christmas trees ARE fucking amazing, and the way the light falls through a window stencil is incredible if you stop walking past it because "Ho hum," and take a moment to appreciate its beauty. Cars and shoes and that mural at the hospital...they are pretty neat.

5. If you're feeling cranky, something is wrong. Try to eat, sleep, and poop before all other things.

Look I’m not saying everyone can shit their way to a good mood, and even some of my own moods go way beyond something that a simple sandwich can fix, to say nothing of serious or chronic chemical imbalances. But when things are particularly out of focus in a given day, it's always useful to check the usual suspects first. I can't tell you how many writers blocks were swept away with the careful deployment of a sandwich and a nap.

If you're enjoying this blog, and would like to see more articles like this one, the writer is a guy with a rent and insurance to pay who would love to spend more time writing. Please consider contributing to My Patreon. As little as $12 a year (only one single less-than-a-cup-of-coffee dollar a month) will get you in on backchannel conversations, patron-only polls, and my special ear when I ask for advice about future projects or blog changes.
at June 27, 2015