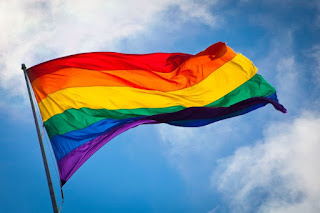 In Stephen King's Rita Hayworth and The Shawshank Redemption (the movie name is shortened) Andy writes a letter each week to the state to improve the deplorable prison library.

Eventually he is sent a box of used books and told that they trust the matter is now closed. They request that Andy stop sending them letters.

Andy's response is to start sending the state TWO letters a week. He does this relentlessly, pestering them until they send him real money for the library, several boxes of real books, even some records, and more.

This is how I feel today.

I feel like Andy looking down at that box of used books. A victory, no doubt. But not enough.

I am elated about the confederate flag coming down and the SCOTUS decisions on health care, Disparate Impact, and equal marriage. This week was pretty good; I am not completely embarrassed to be an American right this second. But the minute the champagne flutes are empty, we've got a long way to go.

Trust me that the matter of equality is not closed. Gay and lesbian adoption, housing, job protection--and that's just in the LG part. Bi erasure (often even by the LG folks), higher violence among the BTQ part of LGBTQ. The horrifying violence facing trans persons. Especially trans women. Especially trans women of color. In all but two states discovering a woman is a trans woman is an acceptable defense for murder. And all this is without even digging into racism, misogyny, and other marginalized and erased groups that are far, far, far from equal.

This box of "took you long enough used books" is not going to shut us up, this "library" is not good enough, and we will now be writing "two letters a week."

Crap quality version of the scene: