How Many Would It Take? (The story you've been told.) 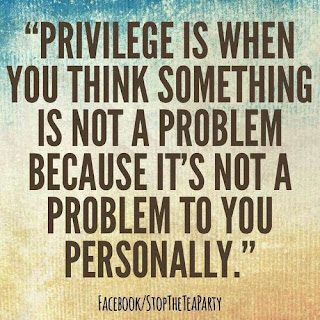 Consider this those with privilege (cis het white men in particular):

Consider the story many of us tell ourselves that racism is basically conquered. A malevolent force that no longer carries any real power to harm anyone.

How many people would it take who had power over you and hated you for no reason beyond the circumstances of your birth for your life to be SIGNIFICANTLY worse?

Give it some thought. It's a serious question. I don't mean a dystopian nightmare of cartoonish sneering everywhere you walk or gasps when you walk into a room, I just mean that you could trace back a significant difference in your quality of life from where it is now to that hatred.

10%? Maybe 5? Maybe even less? What if only two percent–one out of of every fifty people just HATED you for no real reason other than it was you. 2% doesn't seem like very much does it? Most of the world is still neutral toward you.

But think about it for a minute... Think about that story you've been told.

Two percent probably means you would have had a boss by now or a boss's boss that could have vetoed any promotions or raises you might have been given at this point in your life. In fact, they could have made sure that there was an unspoken rule that you weren't to be promoted and there was always this vaguely antagonistic pressure on you. And that is only if you got the job in the first place–assuming somehow the people who hated you were never involved in passing you over during hiring. And if your performance wasn't as good at that job, maybe you had less luck getting another one. You certainly could have been turned down for a loan or credit if one of those people were working at a bank. If they were high enough to make sure it was clear that people like you weren't to get loans as easily, you wouldn't have even had to run into that 2 in 100 personally. Not getting that loan may have had a cascade effect in your life. What about if these 2% were in a position to set policy?  I mean there are hundreds of politicians at each level of government so that's lots of them who can quietly make sure to pass laws or tweak existing ones in a way designed to hurt you (even though they were ostensibly about something else). How many times have you JUST made it to something vitally important because of a cab driver or a bus driver helped you out–someone who could have messed with you and made you miss it. What if they were cops? There's LOTS of cops.  What if they were an officer…and they stopped you and looked for problems. How many citations would you have gotten by now? What if one out of every fifty people was just HOPING you would fuck up on their watch so they could nail you. One out of fifty co-workers, teachers, people you met on the street, vendors.

What if it was your president?

And if you have more than one characteristic people hate, you have to navigate a whole different 2% for that characteristic too. Stack a few on top of each other and easily 10% of the entire world has a vested interest in you fucking up. One out of every ten people you meet will try in some small way to make your life a little worse for their being in it.

So back to our privileged folks. Does one out of fifty sound unreasonable? It should. It's probably way more than that. We who don't experience bigotry tend to think of it as something only our shitty uncles forward us e-mails about, but how is it that we somehow all have that one shitty uncle but don't think it's an issue. It's not like it's the same guy who is all of our uncles. Or we've all heard something spectacularly bigoted–probably pretty often–but still think no one really thinks that way. Or we see stories of revolting bigotry every day in our news and keep thinking of it as a long, unbroken chain of one off events and isolated bigots rather than an endemic and systematic problem. Or we ignore slurs because we don't want to make a scene. Or... Or.... Or....

Or we elect a president who is an outspoken bigot because apparently that stuff doesn't bother people enough that it's a deal breaker.

The truth is it's all around us. It's on a spectrum, so not everyone has to be an Archie Bunker caricature. Some people dress it up real pretty and have lots of rationalizations that make it socially acceptable. Some people do it by claiming that everyone who points it out is themselves a bigot. There are lots of bigots about. People just know better than to talk about it openly most of the time.

But here’s the kicker: How much WORSE would it be if no one ever believed you? If pretty much the other 98% ALWAYS covered for that 2%. They always said it was about what you did, not who you were. That you deserved it. That maybe bigotry exists but THIS time it was just a fluke. They always played devils advocate. No matter what. They ALWAYS told you that it was YOU who were crazy and at fault no matter how ridiculous the discrimination became. And in the most clear cut cases they defaulted to trying to talk about other ways in which that person was great. And the angrier you got about this whole affair, the more people treated you like a pariah.
at December 15, 2016