SJB On Guns and Mental Illness and the Stories We Tell 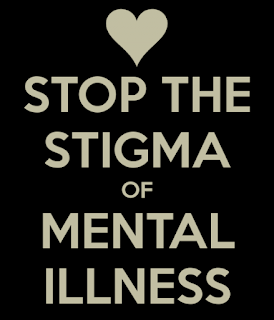 There's a story our society tells when an atrocity is committed (and "atrocity" is the right word, not "tragedy"). As we grab for the answer, if we find something strange and different like a religion or an ethnicity that doesn't belong, then we blame that. If someone was other the other part was the reason they committed the action, and there need be no complex examination of the calculus that led to such a decision. In a convention that should shame us as a society, but somehow does not, ethnic identities can be guessed with high accuracy when news is breaking–before so much as a name is even known–by listening for code words like "terrorism," "immigration," "drug related," or "thug."

When the offender is white though, these ways of slipping them quietly into other groups that explain their penchant for committing terrible actions breaks down, of course. Even when white supremacy is an endemic and emblematic source of domestic terrorism, or drugs are involved. Even when several white people take over a government building in Oregon or aiming sniper rifles at federal agents and promise to go down shooting if removed, we cling to words like "militia," "gunman," or "shooter" but soon the story of white people committing atrocities will always turn to mental illness.

In a strange sort of "excuse" we rarely give to any other group, suddenly any white person who commits unspeakable violence is "crazy."

"Mental illness," or whatever euphemism for mental illness is being used ("deeply troubled," "crazy," "insane") does not erase the glaring problem that even when these things are true, they are still irrelevant and focusing on them both harms others and pulls the scrutiny from where it belongs.

It is actually a good and wonderful thing to lament the deplorable state of mental health treatment in this country and culture. The lack of easy access to affordable care is revolting, and the stigma that mental illness is not actually illness and people can just will themselves to be well is huge. Most people are still trying to tell folks with mental illness to eat right and exercise and just try NOT having that chronic disease. And those are the ones not simply recoiling in fear.

First of all, they are usually using "mental health" as a shibboleth for "people who do terrible things." The suggestion is that no one who does something like this COULD be sane. And even though this "excuse" is rarely extended to folks who aren't white, let me be absolutely clear about this, and I'll even use bold to make the point:

That is, by every psychological bellwether, completely inaccurate.

People who commit atrocities are diagnosed clinically sane ALL THE TIME. And the vast majority of people with mental illness are victims of violence not perpetrators. By a huge margin. Doing something terrible isn't an automatic sign of mental illness.

I know it hurts to think that humans are capable of violence without something being fundamentally wrong with their mental processes, and that we desperately want the capacity to do violence to multiple people indiscriminately to indicate that something MUST be faulty in the wiring itself, but that simply isn't true. (Or maybe it is true but what we should be looking at is a culture which "paints the target" with bigotry and excuses the entitled and angry behavior leading up to such an atrocity, not the functionality of specific brains.) We can all be monsters under the right circumstances. Some of us are. And I'm sorry if that's scary, but many who take a gun and do a terrible thing with it are completely sound of mind.

The things that make us monsters are not always bits working incorrectly. Sometimes it's the culture that tells us the "other" isn't worth living. Sometimes it's an expression of the hate we are taught every day. Sometimes it is the enculturation of an indoctrinating force.

Sometimes the things that make us monsters are the bits working exactly as intended.

When people DO this–when they say that "of course he had mental illness because no one who didn't could have done such a thing"–it's not only sloppy and uncritical thinking, devoid of logic and the slightest psychological accuracy, but it also perpetuates the stigma that the mentally ill are dangerous. They equate the two in a way that is not only inaccurate, but also causes a lot of splash damage to those who suffer from mental illness.

Am I saying no one who is mentally ill has ever been violent or done something violent? That's ridiculous. Of course some mentally ill people are violent. Some vegetarians are violent. Some mathematicians are violent. But we know better than to blame vegetarianism and mathematics when the latter to cases are true. None of these things is the deciding factor in someone's violence. Even if this weren't a post hoc ergo proctor hoc fallacy right out of a Freshman textbook, the correlation is so low as to make the comparison actually disingenuous and not simply fallacious. By significant margins, mentally ill people are more likely to harm themselves or BE harmed by others than when compared to the general population. And certainly compared to groups like young white men. When we go digging for it, like it's the cause, and nothing more need be said, that's the problem. That's called, ironically, a sharpshooter fallacy.

Even, as in the case with the Oregon community college shooter, when the presumption turns out to be accurate, it is a red herring. We might as well turn up proof of athlete's foot or tooth decay for all the causation that is indicated by a diagnosis like Aspergers or "psychological problems." People with far worse "psychological problems" aren't violent at all, and most on the Autism spectrum are extraordinarily non-violent. So that's clearly not actually the cause even though that's what the media tries to dig up. And even if such a condition increases a predisposition, ignoring the underlying cause would be a little like doctors shrugging when an immune compromised person gets an infection instead of finding out what the infection is.

"Eh they were immune compromised? What can you do?"

Because here's the other problem: folks are using "crazy" to circumvent a lot of relevant social analysis that could and should go into the calculus of such an event. Everything from the absurdly simplistic and unregulated access to instantly-lethal, multi-lethal, ranged weaponry to the effect of toxic masculinity in the radicalization of young men, to racial inequality to a sense of white, male entitlement, to tribalism and othering is simply swept under the rug in one swoop because that person was "obviously just crazy." We dismiss dozens (hundreds?) of conversations about the culture these minds were marinating in to simply write it all off as being about mental illness. "Oh well, what can we do. Just another disturbed mind. Hope it doesn't happen again...or again...or again..." 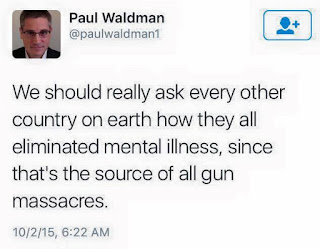 Mental illness affects a certain percentage of people all across the Earth–why do these atrocities so often happen in the U.S.? And why are they so often done BY white males? These are the things we should be digging into–not finding out every person in a shooter's past who ever said they were troubled.

Mental illness is not homologous to "evil." And people really should either bang that drum all the time or think hard before they give it a whack after a highly visible event.

Because the stories we choose to tell might just be making things worse for a group that is already erased, marginalized, and stigmatized.
at December 17, 2016