Interested in following Writing About Writing? Or Chris Brecheen as a writer?

Writing About Writing is on several social media, but each medium is updated a little bit differently. Some get every post I make, no matter how major or minor. Some media are privy to a cycle of "reruns" where, at least once a day, I cycle through the popular posts of the past so that new folks can see old posts they may have missed (and old fans can be reminded of treasured classics).

Some social media have different signal-to-noise. Some I update in other capacities. Some are fire and forget. In some, I post my writing that is not "about writing like the blog NOT Writing About Writing. While other places I will link only this blog and the posts I write here.

You want My Public Facebook Page. Follow it (or friend it if you check out the guidelines below). Though be warned that it can sometimes be like drinking from a firehose. All posts from ALL the places I write, reruns, plus navel gazing, proto-posts, Jack-Handy-caliber deep thoughts, amateur political punditry, social justice thoughts, macros, silliness, and geekery.
You want My Twitter. Every post from every blog plus the reruns, but no other posts because I don't really use Twitter except to cross post.
You want the Writing About Writing Group. 2 posts a day (usually 1 new and 1 rerun). There is one meme (but only one) that is the prior day's best from the page.
Okay, that's cool. No no. It's fine. Really. While I put some aloe on this burn, you want the Writing About Writing page. Lots of memes, macros, puns, and comics and it's easy to scroll past the occasional post from my blog.
Follow the Writing About Writing Page, The Writing About Writing Group, and my Public Facebook Page. Then go to the following button on the page and set your preferences to "See First." I will warn you that you may see some repeat posts, but this if you want to miss the fewest things I post, that's the way. 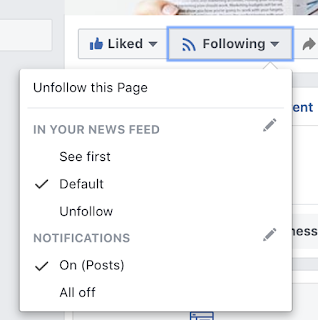 Follow Writing About Writing through Google Google's Blogger allows you to assemble a collection of blogs you follow. Most people following the blog this way have their own blog through Blogger, but it's not necessary. (You only actually need a Google account, which many people have through Gmail.)

Pros- Shows all updates (minor and major). Updates in a timely manner.

Cons- No reruns. No posts from any other venues. Blogger usually takes a few hours to get the latest post up.

R.S.S. Feed (Feedly, Feedburner) If you have an RSS reader, you may like to simply be updated by having your RSS feed updated with the text of my latest post. If you click on the Feedburner button AT THE BOTTOM of the page, you can subscribe to Writing About Writing through a number of RSS readers including FeedDemon, Netvibes, My Yahoo, Shrook, NewsFire, RSSOwl and more.

Cons- R.S.S. feed does not include reruns (even the really awesome ones). No posts from other venues. Many RSS readers are JUST text, so you won't see the images. Also, if you get a little behind on your feed, catching up feels Sisyphean and knowing the next update is coming feels like the sword of Damocles. (Gotta get my Greek metaphors on.)

Email Notification At the bottom of the page, there is an option to put your email into a text field and subscribe to W.A.W. through email notifications. Every time I post an update, you will be sent an email notification containing a link to the post. I've been told that there's even some preview text (the first 200 words or something).

Cons- No reruns. No posts from other venues. You probably already get ten billion emails a day.

Twitter
(That heading is a link) I was off Twitter for a while when they were making excuses for not banning Nazis. They seem to have pulled back from that position and are now basically as horrible as most other social media, so I opened a new account. It's JUST a tweet of our posts (and reruns). That's it.

Pros- Gets all posts (reruns, new, other blogs, everything)

Cons- Gets nothing else.


Facebook Page for Writing About Writing
(That heading is a link)

In order to build an audience on Facebook, I spend a lot of time posting memes, macros, "you should be writing" reminders, inspirational messages, videos, and whatever thing about writing I find interesting and want to share.

This may seem counter intuitive, but I actually try NOT TO POST TOO MUCH FROM MY BLOG. The audience I've spent years carefully cultivating will not stick around if things get spammy. Most of the FB audience is there for the shenanigans, not the blog cross posting. FB's algorithm blacks out posts showing a post to roughly .00025% (that's 1/40th OF ONE PERCENT) in order to encourage content providers to spend money promoting themselves.

Pros- Lots of other fun stuff going on. Most posts from other venues.

Cons- Lots of other stuff going on. FB algorithm prevents page followers from seeing every post so some W.A.W. posts will get lost. Not a good place to get all the updates if you want them. Enjoying anything on FB requires a shower with steel wool and industrial cleanser. Facebook is the antichrist.

Tumblr
(The heading is a link)

I joined Tumblr after Facebook's latest round of content throttling. Then Tumblr started doing it too and THEN they axed LGBTQIA+ content because of overkill compliance with Fosta/Sesta and now I post maybe one thing there a day. My goal in the new year is to send the "best of" post that I put up on the GROUP on Tumblr as well.

Cons- Tumblr really took me for a ride, and now it's hard to give a shit about them. I sometimes forget days and don't really care.


Facebook's Writing About Writing Group-
(The heading is a link)

Different from the FB page, the Facebook GROUP will only have the blog posts and a single macro/meme/infographic that is kind of like "The prior day's best."

My Public Facebook Profile
(The heading is a link) My Public FB profile is a melange of personal updates, posts about politics and social issues, geekery, things I find about non-monogamy, introversion, and pop culture. But it will also include some "behind-the-scenes" thoughts about writing, running a page, and the creative process. If you wish there were more "Social Justice Bard" posts, this is a place where you can read the proto-versions of some of them as well as the ones that never make it to the blog.


Pros- See more of "me." Get behind the scenes updates. See "alpha" versions of posts and thoughts that never quite make it.

Technically this exists. Very very very occasional updates. Not really a good way to follow anything. I actually post most pictures I take or of me on my Patreon as part of the selfie tier.

Others? I would love if something could replace Facebook. Anything. Right now, though, I am fettered here. For all its throttling and trying to squeeze blood from my stones, Facebook is what has made it possible for me to be a working writer.
at January 19, 2020