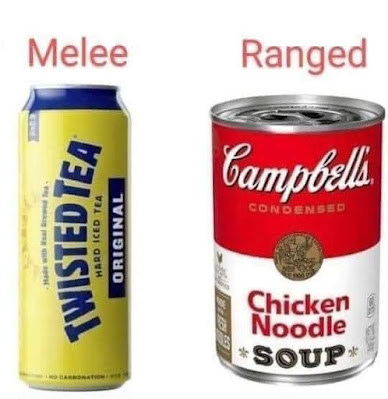 Here is a collection of the best memes and statuses from my public Facebook page over the period of Dec-16th through Dec-31st. (You're welcome to follow me there but read up in the Facebook FAQ [last question] before you send me a friend request.) Technically, I'm only working "behind the scenes" this week, to catch up on reward tiers for the patrons who keep the bills paid around here, but we're REALLY far behind on these compilations, so I don't want to let even a single Wednesday slip by until we're all caught up.

Most of these are not contextual on a specific event of the moment, but do remember that it was in late December, so the number of cases was spiking dramatically.

Save me from mediocre men (and let’s face it, it’s almost always men) who think people are fooled into conflating being the most arrogant person in the room with being the smartest. 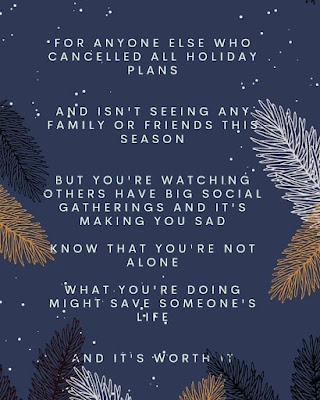 Well, well, well, some people sure are getting pretty pissed off about how the vaccine—the vaccine they don't want or need for "just the flu hoax bullshit" of which they shant live their life in fear—is not going to be offered to them absolutely first.

It's SO American that the best way to get people to want something is to tell them they can't have it. Half the country has the social contract mentality of toddlers; reverse psychology was bound to be surprisingly effective. 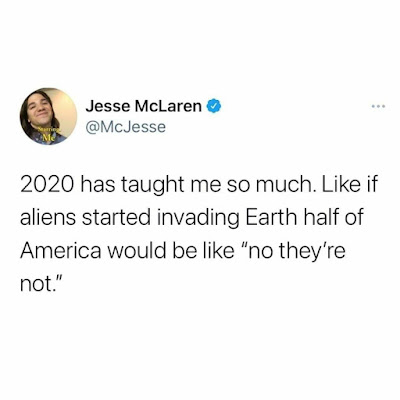 Them: How did you avoid falling into another relationship like that.....toxic in many of the same ways....just making all the same mistakes again? Or....like Diet Coke versions where it's 'better' but you're still not happy.

Me: Oh about 20 grand in therapy bills spread out over five years of grueling emotional work on myself.

Me: Yeah, I didn't oops into this outcome. Therapy needs to be accessible, affordable, and destigmatized.

You know, Dems CERTAINLY have their problems and I'm sure they would NEVER have shut down the country wholly for 9 months and given us all $1500 a week, but the sentiment that both sides have approached Covid-19 stimulus with indiscernible real-world differences is making some people look breathtakingly uninformed. 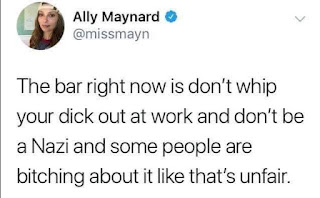 It's interesting to watch so many people, particularly on the left, observing the far right and its refusal to participate in the Georgia runoff. Objectively, they understand how foolish and ultimately destructive to ANY right-wing aims this would be. They see it as unfathomably foolish and short-sighted on the part of those ridiculous conservatives. They realize that even a few people sitting down in the mud and refusing to participate because they can't get exactly what they want is going to end up meaning Democrats may very well run the table and make things a whole lot "worse" (for them). They are pointing and laughing. What fools conservatives have let themselves become.

Of course, this behavior is par for the course from the left. Pretty much every election. 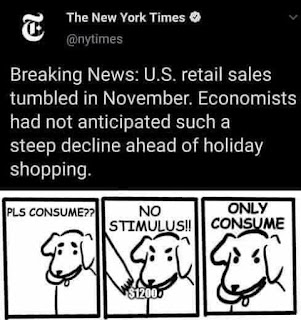 This is a post that came back up in memories from the PRIMARY SEASON that was happening a year ago. It's probably important to understand that this is about flavors of left-wing ideology, and not Nazi sympathizers.

Chris's Pass/Agg Theater of the Day:

It would be very nice if people nursing their persecution complex about how hard it is to support their candidate out there in the big bad world would pay closer attention to what happens in their own spaces when someone tries.....not even to ARGUE with them, but simply offer an alternative perspective.

Like, I'm not saying we're all playing nice (some are meaner than others), but if you watch your friends dogpile someone who says "Hey we feel the same way about YOUR guy" as a point of commiseration over a rough primary season....and love react the dogpile comments....and have nothing to say about the fact that they're kind of being mean and assuming just the WORST about that not-your-guy candidate....and even though maybe YOU were pretty measured, the vitriol is dripping off the whole thread.....and the person has to dirty delete just to keep from getting nasty-gram notifications for hours......then maybe YOU really shouldn't be complaining about how rough-and-tumble things are elsenet.

Perhaps your own knitting needs some tending. Or maybe not, and you just need to pull up your big-kid pants when you jump in somewhere else. But either way, you are not being the change you want to see in the world. 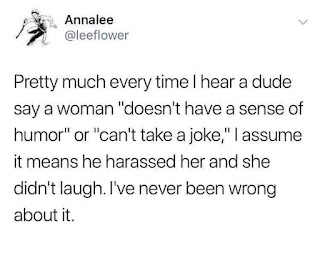 You know, a while back, I wrote (on Livejournal) about four guys who tried to mug me, and one of the comments really actually WAS about how I shouldn't have been walking around with an iPad out at night and how I should call the cops and report the crime to teach them a lesson.

But the OTHER thirty-something comments were not. They were support, commiseration, and checking to make sure I was okay.

Plus, no one thought I was out to ruin the muggers' lives by making shit up. They didn't tell me I was foolish to have been friendly with the first guy to approach me and I should have known better than to lead them on to think they could just have my iPad.

And no one said I should have known better than to have been alone walking past four guys at night. Or that young men just need iPads and can't control themselves if they see them out in the open with such limited apparent protection. No one said "muggers will be muggers." They didn't ask me if I had been drinking, how late it was, or imply that I should have had an escort.

But mostly...no one once...not EVER–even though the event ended up being a fairly incredible example of my not yet being *successfully* mugged–voiced doubt that I had relayed the events EXACTLY as they happened.