Bullshit Narrative 4 "If We Outlaw Guns, Only Outlaws Will Have Guns."/"Criminals Don't Obey Laws." 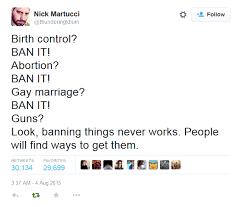 Previous Bullshit Argument: "No Law Could Have Prevented a Determined Actor."
Or all the way back to the menu.
Listen, this is fucking rich coming predominantly from the same group of folks that have twisted themselves into pretzels to criminalize sex work, abortion, drugs that are as mild as alcohol, and even First Amendment civil protest.

First of all, logically, the first phrasing of this is meaningless. It's something called a tautology. It's got a little play on words to make it sound clever, but it is essentially the same as saying "If you use soap to wash your hands before you eat, the only germs that will still be there will be the ones not affected by your soap." Of COURSE that's true. But it doesn't say a damned thing about whether it worked. If the outlawing of semi automatic rifles takes us from 1 in every 15 Americans owning one to 1 in every 500, that's hardly a failure.

But it is also a deep post hoc fallacy. "He did it, therefore no law could have prevented it." A clever chiasmus wording does not a sound argument make.

This narrative demonstrates a breathtaking lack of awareness of how basic, fundamental laws work. When we make something contraband, we know it's still going to be out there...just not as much. We don't just pass a law making things illegal but still keep the fucking things available at every local Walmart...except now it's illegal; we also pass other laws around the whole market to create "chokepoints" that cut down on the means and opportunity of someone being able to get their hands on the items if motive outweighs illegality as a deterrent. Within a few years parts start to break down and be irreplaceable. Ammo isn't available. People don't want to risk the punishment if they get caught.

Technically nothing is stopping me from running through a Starbucks with a war rhinoceros either, but as I begin to contemplate the logistics of such a plan (availability of rhinos, availability of rhino armor, likelihood of making it to Starbucks before being apprehended), I realize it would probably be really hard to pull off and I'd rather play Shadows of Mordor.

If I could pick up what I needed on my way home from work tomorrow, I might be more inclined to ideate this plan.

I know I could get a lawn dart if I wanted to. YOU know I could get a lawn dart. Hell, I could probably design and build a lawn dart if I cared enough. (I don't actually want a lawn dart, but they're out there, even though they're illegal.) But we don't just throw up our hands and say "Oh well. It's still possible to get lawn darts. Guess all laws are useless. Might as well stock them at the local CVS." I know I might get arrested for trying and the price will be really high and I can't just go to the lawn dart store that orders them from the lawn dart factory and that is the same thing that happens when laws make anything contraband.

Lastly, it's an absurd, ridiculous, ludicrous claim. It's like standing in front of one's neighborhood composed of nothing but blue houses and saying that painting houses blue simply won't work. There are several other countries that stopped this bullshit in its tracks or at least cut it down by passing laws. These laws absolutely DO work and saying they don't is being deliberately obtuse.

I'm not saying these laws are right or you shouldn't have guns. I'm saying this ARGUMENT is awful.

All these "can't put the toothpaste back in the tube" arguments try to envision a world where the only legal change is that a switch is just flipped in some room from "legal" to "illegal," and suddenly there is a flooded black market and tons of hidden weapons. And yeah...you know what? Some of that's going to happen. But acting like buyback programs and outlawing parts and ammo and seizing weapons that are found in the course of other searches or whatever won't have an impact in five to ten years is absolutely the pinnacle of tactical mendacity. It's not like "The Black Market™" has an outlet store in the strip mall on Fifth St.