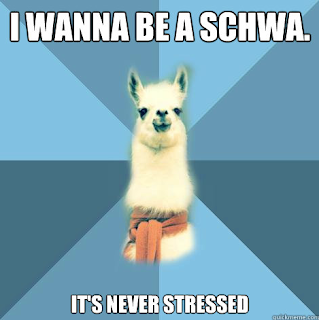 Grammar is important for a writer to know in the same way color theory is important for a painter or musical theory is for a musician.  You have to know some.  It's good to know more.  It's best to know as much as you can.  But if you act like it's a critical part of the art, you're not probably confusing being a pedant for being a creative, but you're probably being a douche to boot.

Teaching ESL and developmental English, along with a nerd hobby/fascination with cultural-linguistics studies makes me pretty non-prescriptive about grammar. I don't have one of those lists of pet peeves about semantics and grammar that so many writers seem to think makes them good writers.

This article about a Fish a Rat and a Prescriptivist pretty much explains my problem with hard core prescriptivism. 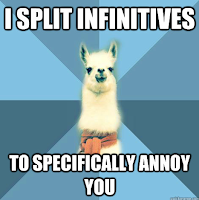 Plus most of the people I know who let themselves have partial aneurysms in their brain every time someone uses "literally" before some kind of hyperbole are going to turn around in five minutes and call their cheeseburger "epic," so it's all just selective hypocrisy anyway. And don't even get me started on how often the "chic movements" within prescriptive grammar are actually wrong. (For example, saying "I am well." to answer the question "How are you?" doesn't prove that you are a highbrow sophisticate. It proves either that you are merely not sick, or that you don't know linking verbs work.)

I surely wouldn't give most people such grief, for these aren't MY pet peeves.  However, when fussy little pedants insist on wearing the mantel of superiority, I feel like it becomes my life's quest to take them down a peg or two.

Myriad as a Noun?
Pet Peeves
A Linguistic Themed Potpourri
Four things Every Writer Should Know About Grammar
Glad to Hear You Don't Have Con Crud.  ("I am good." vs "I am well.")
Grammar Memes
A Fish a Rat and a Prescriptivist Walk Into a Bar
10 Words Writers Need to Learn to Use Correctly
Word Crimes? (My response to the Weird Al song)