It Ain't All Unicorn Rainbow Farts 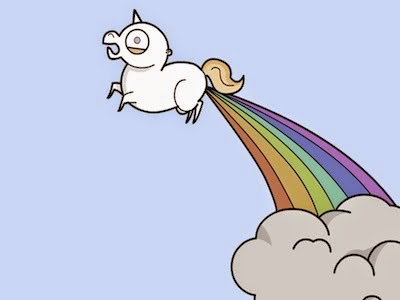 At first I was going to try to gut out today's post (which is technically Monday's post). Then I was going to get it up uber late–like maybe after eight or nine tonight.  Then I thought maybe I would put something cheeky up here to kind of blow off the day.

But here's what I decided to do instead because of exactly what this blog is all about. It's not just about writing at the content level; it's about writing at the meta level. I leave up my shitty old writing so you can see me improve. I keep my articles with fifteen page views so you can take a look at what didn't work. I tell you how much money I make so you can be realists about how much time and energy it takes to get paid for writing. I post about my ebbs and flows so that you know that writers are as mercurial as other artists and not to judge us by our final product.

And it's probably important that you know all those "real" writers out there have themselves shitty weeks. They sit down some days and it's like pulling teeth. Some days just suck. Some WEEKS just suck. Sometimes it goes on even longer.

There are a lot of reasons for me having a hard time right now, from next level personal shit to readjusting to The Contrarian being back to simply fighting with the words but they're there.

I still sit down every day. I still write every day. But whipping up a coherent post in a timeline that isn't geological is proving Herculean.

It'll get done eventually. I'll break through. The waters will flow again, and probably sooner than most writers because I sit and write every day. Free flow writing (like this) is as easy for me as thinking (it's just the more structured stuff that's giving me trouble). The discipline is there, so I tend to pop back as soon as the juju starts to flow.

But don't ever let me make it look like it's always easy. You see the end result of hours of work. Some days are just clusterfucks of teeth pulling. And every writer has their dry spells that they have to just grit through.

So if you're having a bad day or a bad week or even a bad month, you're not alone. Just keep sitting down and working and the words will return.
at March 11, 2015