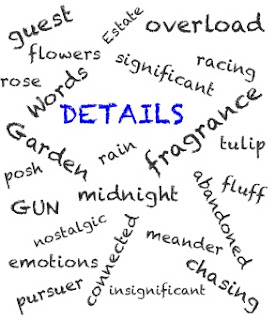 How can a writer know what is a delicious sense detail that grounds the reader in the moment and what is just way too much that makes the reader skip pages while thinking, "Damn you, Anne!  Damn you and your twenty page description of a house that will be burning down in four more chapters without the layout and curtain rug scheme ever having been important! Why do you hate us?!?"

A writer trying to render a moment or a room or a character or anything must not simply gush an endless spew of concrete imagery or their readers will cast about for incendiary weaponry and hunt them down.  Yes, they must render their subject with lush details from each of the five senses.  But they must also decide which details are important.  In fact if concrete imagery is the lifesblood of good writing, significant detail is the beating heart--controlling the flow of that imagery so that all the other bits aren't just free floating in a pool of detaily blood.

That was a cooler metaphor in my head.

Significant details are important.  Insignificant details are BORING.  It's hard to explain how boring they are in terms one can understand, but if you've seen Stephen Spielberg's A.I., it may help.  Insignificant detail is somewhere between 37 and 59 A.I.s worth of boring.  One of the first--and most painful--lessons that many writers need to learn is that they need to let go and trust their readers to fill in the gaps and not be so worried they're going to get a perfect vision "wrong."  If you describe a person, an office, a kitchen, anything, you can give a few details that are important, and trust your reader to fill in the rest.

Consider this description of a person:  John was six foot, three inches.  He weighed two hundred and fifteen fifty pounds and had a BMI of twelve.  John was 26 years old but had a face that appeared six to ten years younger and wore his brown hair in a short crop cut.  He has green eyes that he used to look at most people for no less than three to five seconds when he talked to them.  He wore a maroon tie that went with the thin vertical stripes on his button up shirt.  His black slacks were a poly blend.  His socks were brown.  His loafers were black and cost him three hundred dollars at Nordstroms.

Yawn!  Unless you are a cop trying to I.D. a suspect, you are probably falling asleep just from that paragraph.  I'm pretty sure most cops would fall asleep too, but they know how to sleep with their eyes open, so it would be harder to tell.  Yes it is an accurate description and one with a lot of concrete imagery, but it doesn't show the reader the difference between a detail that is important and one that is just superfluous.

Now consider this "identical" description of John: John towered over most people, and donned a power tie and pricey designer shoes even to go grocery shopping.  He cropped his hair close, worked out constantly, and worked on his steely gaze with everyone he met.  But perhaps because of his boyish face or perhaps because his socks didn't match his pants, he never could quite get taken seriously.

See how I threw some details out?  (Don't need them.)  And most others were worked into a description that actually tells us more about John than the first paragraph even though they are less technical.  The details I chose were significant to John's description as a person trying to be taken seriously but failing.

A fiction writer needs to be able to lie.  Granted the good writers are lying to tell the truth, but unless you're writing non-fiction, lying is just sort of a prerequisite.  In fact, most writers are wicked good liars if they want to be, and it's just a pretty good thing that most writers are also moral enough to know they have a duty to the truth.  But the key to a good lie is in the details. Think about how you make an assertion when you lie.  You tell your boss a nasty symptom when you call in sick--that's a detail.  You explain the visceral events you witnessed of the horrible accident that happened to make you late to pick up your partner (even though you were just playing World of Warcraft and didn't want to leave the instance--that's a detail.  You explain three fake mistakes the bank teller made to support your lie that the bank must have screwed up your deposit when the truth is you didn't even go to the bank--that's three details.

But a really good lie has a tiny perfect detail like: "I remember thinking the teller was screwing up but there was this mean looking Asian woman behind me who kept glaring at me and fiddling with her queen head brooch like she was daring me to take longer, and I really didn't want to make a fuss."  Notice I didn't include the color of the counters or the height of the teller or any of a million details.  Why would I remember any of that stuff.  But someone fingering a brooch while they glare--that seems like just the sort of thing that would slam dunk a lie or a story you truth teller writer, you.


Look around the room (or area) you're in.  Not to put too fine a point on it but you could probably write a book about this room.  The textures, colors, shapes, lengths, heights, weights, the fonts of anything with writing on it....  It would take you pages and pages to get every detail.  And if you ever did write such a book, people would hunt you down with high powered rifles for the good of all humanity.  But take another look.  What's important around you.  What defines the area.  I'm in a room with a half a zillion details, but the important ones are a chocolate brown couch, an eyesore computer on a regular table that cramps up half the room, two DVD racks that are both totally full of DVDs, teal walls that Supportive Girlfriend painted herself, a leafy rug that matches the wall and the couch resting over the hardwood floors, and a huge flatscreen TV with a Wii underneath it.  Any more detail about this room, and I'm going to lose a reader.  But with those details I can give you a sense of the contrast in this room between tasteful decor and technology.  But I didn't tell you about the lamp or the curtains, I didn't mention the floorboards.  You don't know where the TV is in the room or that a DVD player under the Wii.  I didn't mention the mirror, the decorative plates, or the painting.  Those details exist, along with a million others that don't add anything to the flavor of the room.

There are a few major ways to approach significant detail.  I'll write them into their own articles eventually (cause this one is getting a bit long), but for now let me just list them and say a bit about them.

Significant detail as characterization through point of view.  If your narrative voice works through a focalizer--either because it is first person or because it is a close third, the significant details should be those that the character would notice.  This is a good way to reveal what things the character cares about enough to notice.  George R.R. Martin is very good at this.  In The Song of Ice and Fire, one character is intensely interested in clothes.  Another couldn't care less about clothes but notices all the food. A third character is interested most in the emotions of others, and yet another character pays close attention to who is armed and what they are armed with. This not only describes the world in concrete imagery, but also says something about the mindset the characters through which the perspective is reached.

Significant detail as characterization through stand out features.  If your narrative voice isn't through a focalizer (for whatever reason) or when you're characterizing someone, you can use significant details to help characterize them.  A guy with a pony tail, a tie-dye shirt, and sandals has an almost immediate characterization.  There may be delightfully stereotype-transcending revelations about this character, but on the surface, things are pretty clear.  You can get the idea of who this person is and how they come across without me describing their every single fabric of clothing and feature, height, weight, or anything.  This effect took me only twelve words.

Significant detail by theme.  Some of the details you might pick out to describe will be symbols or may echo your theme.  You might describe a steeple covered with bird droppings in a story about religious corruption, or the hallway full of doors in a story about having no good choices but too many bad ones.  Steinbeck is a master at this (and someone almost everyone has read).  His intense descriptions of setting, especially at the beginning of a chapter, almost always echo the conflicts going on within the story.  He describes in detail the line between light and darkness from a lamp when the lines between good people and evil people begins to become clear.

One of the reasons revision is so important is that the first time a writer writes something, they may not know what's going to be significant.  Only as themes and characterizations are teased out in later drafts will these aspects reveal themselves.

I can't tell each writer what style to embrace in their own writing.  Some have the lush and languid descriptions of Umberto Eco and others the sparsest details of Carver's minimalism.  But whatever your style, your details should be significant, and thinking that endless gluts of ponderous details makes for good writing without understanding what is significant can lead to some very, very boring prose.

What I can tell you that current literary trends--both the unsung heroes of the "high art" world and "what's selling today"--tend to be focused on two things:

1- Less is more.  If you don't have a reason for lots of detail, use less. If you aren't sure if a detail is significant or insignificant, you should assume it's insignificant.

2- Modern literature emphasizes the development of character over plot (even more than a generation ago), so having your significant details characterize is always a good choice.


Writing Prompts that are good for Significant Detail:

Writing Prompts-Significant Detail
Get into the head of your character (especially the third prompt).
Writing as a Child
at November 13, 2012