The second week of NaNoWriMo is the toughest but here are some ways to help you slog through.

The Best of the Twins here.

So you ignored Chris's Haterade Advice (as well you should) and started up on NaNo. Now you're in week two, and shit just got real. The bloom is off the rose. The glitter is gone. The honeymoon is over. The cliches have come home to roost. The first day you woke up, punched out 2000 words, and thought to yourself "what the fuck is all the fuss about? CAKE!" Day two you spent some time staring at the cursor, but it still got done in a couple of hours. "No problem. Totes doable. Cake." you said. Day three there was that...fucking scene. Oh you got done, but it took like four hours and someone in your life nagged you for the entire last hour to do that thing you said you'd take care of. "I can do this. C....cake." you said, but you noticed a waver in your own voice. Suddenly day four you were uploading podcasts of motivational speeches and having a good cry before you sat down at the computer where you rocked back and forth repeating "The cake is a lie. The cake is a lie. The cake is a lie...."

You have reached the point where your raw creativity is transitioning into discipline and everything just started to really feel like work. This is where your inner drive really gets tested. This is where the sexist cliches about hairy chests and balls and making men come in.

Now you don't want to have to go back to that blowhard, Chris, and tell him he was right to warn you that NaNo was too hard, do you?  No, of course you don't!  So let's get through this, and keep that pretentious n00b from the satisfaction of doing the "Toldja So" dance.


1. Week two is as bad as it gets.
The second week is the hardest. It will not actually continue getting harder and harder. Statistically speaking, you have a better chance of quitting this week than all three other weeks combined. At least according to my memory of what some blogger said who I read like three years ago, and who claimed to have gotten that statistic from the NaNo webpage (with citations like that, it must be true). As you move past week two and into week three, a sort of grisly determination and habit sets in. Not even Aunt Edna and her to-die-for stuffing will deter you from what must be done. You gain this thousand-yard stare, and your friends (the ones you see at all) really wish you would shower, but a kind of grim inexorability has seized you, and if you can get past week two, you are likely to finish.

2. Remember that you're never going to publish this version.
One of the biggest problems in week two is that people stop being okay with writing crap. They start to fall in love with their characters and enjoy their own story. Suddenly they start to slow down because now that they're invested, they're worried about getting it RIGHT. Don't worry about that. Just keep writing crap. There is no way in all the nine realms and all the scrote sacks of the pantheon that you aren't going to rewrite this bad boy at least three times (probably more), so go ahead and keep sacrificing quality for speed. The point here isn't to get it good. It's to get it down. And while that is somewhat true of any first draft, you are taking this zeroth draft to its caricature extreme.

So unclench your butt cheeks, stop worrying that it has to be good, remember that it's a zeroth draft, and get back to writing for the "why-the-hell-not" reason you originally undertook this venture.

3. Stop researching! Fly, you fools.
When you start out, you can check all these random facts about police procedure, acceleration physics, authentic clothes of a dead culture, how fast bodies decay, or the actual city geography of Kuala Lumpur. You don't care that it's slowing you WAY down because you're still in the fun part. But if you didn't catch the last sentence, it IS slowing you way down. All that crap is just a time sink.  Focus on the writing. Just write what you think might be true and put a note to yourself in the manuscript that this will be something to look at when you rewrite.

4. Remember that you're never going to publish THIS version.
Don't go back and fix stuff. There is no damned chance in a million years that you won't end up rewriting this at least three times, so stop trying to make it "right." If something major changes, make a note of it in what you are writing right at the time and keep going. Cleaning up old writing is what revision is for, and NaNo is about finishing, not refining. Fix it later. Plow ahead today. 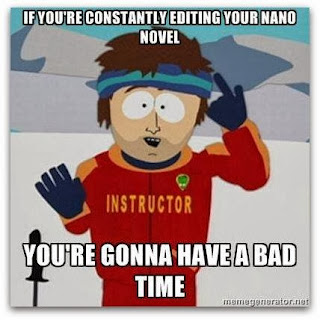 5. Let your characters do the driving for a while.
One of the reasons week two is so rough is that most people have this sense of their story that goes like this: Totally awesome concept. Cool beginning, nifty early scene....something, something..... underpants... ???.... profit.... not really sure..... REALLY COOL END FIGHT! A lot of week-two blues happen because for the first time in the story, you have no idea what you're doing and how exactly you're going to get from point C to point W near the end. That's okay. Let your characters react to the events and drive the story for a while without worrying that they might be derailing your best laid plans. That's how characters are "supposed" to be behaving in stories anyway. And if they start to take you someplace vastly different than the ending you had planned, maybe that's a better story anyway.  Don't worry, there's always time to shoehorn them into a railroaded plot in a later draft.

Welcome to the creative process! You might want to wear galoshes.

6. You're. Not. Going. To. Publish. This. Version.
You think your writing sucks? You think your plot is maybe not as brilliant as you first thought and may, in fact, be a shot glass of the sweat collected from bison testicles? You think your character isn't as undeniably compelling as when they lived inside your head doing buddy Christ poses on the backs of your eyeballs? You think maybe major elements aren't working--at all, let alone with each other?

Here, let me help you out: it's not working, it does suck, it's not brilliant, it doesn't work, you aren't Shakespeare. Got that out of your system? Good. Now you can stop analyzing and get back to writing.

Guess what? First drafts are shitty, and yours is even shittier than most because you're trying to write it like you're The Flash on crystal meth or better yet, that Bruce Almighty GIF that was so fucking funny back on day one but now makes you burst into tears.

But don't worry.  All first drafts are shitty. All of them. Shitty first drafts are how the writing process works. There was literally (hur hur) no way yours was somehow not going to be crap. None. So stop trying to second guess yourself. Quit trying to go back and fix things that you think will make it suck less. Just keep writing.

Remember, novels get published through endless, painstaking hours of revision and editing. They are drafted multiple times. You had no hope of writing something great....or even something that didn't suck. As soon as you stop having that unreasonable expectation of yourself, you can get back to pumping out that sewage line you have hooked up between your brain and the page. If you really want to make your novel good, that's another part of the process.  Do that after NaNo is over. For now, just keep sucking at full speed ahead.

7. Take care of you.
It's all a big joke--and almost a point of pride--how much caffeine and junk food the NaNo writers pack in during November. Ha ha ha, right? Here, let me make a meme about how big my coffee cup is and we'll ride our lollerskates to Lolzville. Ha ha ha ha! NaNo is so droll. Hahahahaha! My coffee is bigger than yours. Hahahaha! Caffeine overdose is funny! Hahahaha! I ate nothing but microwavable burritos for the last thirty meals. Hahahahaha!

Great. Are you done enjoying the fucking frolicking whimsy of it all?  Good, because if you are basically hooking up a chemical spill into your body, the second week is about the point where your body doesn't have anything left to give. That might be why you are starting to hit the edge of your metabolic cope this week. Your body is not a garbage dump, and even legal stimulants have both their backlash and their limits. You may be dying for a good night's sleep, suffering from vitamin deficiencies, and not noticing that your eyeballs have dried out.

No one is saying you need to switch to alfalfa sprouts or forgo your regular morning cup(s) of joe, but you can only be exceptionally abusive to your body for so long before there are consequences.  (And unless you're an 18 years old athlete, that length of time is WELL under a month.)  Don't go overboard on the abuse, even though there turns out to be almost a bragging rights competition about how dysfunctional one can be.

Also, as much as most writers would love to think of their body as the carrying case for their brains, it turns out that they are not sold separately. You can use drugs to power through a bad day or two, but you can't abuse them for a month straight--no matter how many cute fucking memes you make. If all your brain has had for a week is coffee and junk food, there won't be a lot it can do for you in the way of creativity. Its creative dendrites will be covered in grease and sugar instead of neurotransmitters. (Shut up! That's totally how it works!)

Get some real sleep. Eat a real meal. Don't go overboard on caffeine--a little is okay, but you shouldn't be substituting it for sleep. This is a marathon, not a sprint. You don't have a paper due tomorrow.  This isn't even finals week. You have to make it a whole month. You (and your body) are in it for the long haul.

Once you get through this week, it will actually get easier. It will feel more like a grind--just something you get up and do. And if you keep doing it at the same time each day, you may even find that your creativity begins to bloom about thirty minutes before you sit down, like clockwork.

Which is, of course, what we've been trying to tell you all along.

And don't forget the most important thing if you're really serious about being a writer: