The Contrarian has carefully avoided the inky black bump in the bathroom for months. Obviously it is evil and wants to devour him. He carefully goes around it, remembering the traumatic day when I tried to get him to stand there alone, clearly so that it could envelop him in its dark clutches. Yesterday he fell backwards and lost his balance for a second. His foot began to fall towards the evil black square. There was nothing to be done–it was that or crash mercilessly into the wall. His foot came down. But then he saw that touching it caused a bright light to flash some numbers at him. Since then he's been jumping up and down on the electronic scale to make the digital display show his weight every time he's in there.

Yesterday, T.C. spent about thirty seconds flipping around his string cheese to try to get it lined up with his mouth. Feeding himself finger foods isn't usually a challenge anymore, but the limp cheese kept flopping out of the direct shot to his mouth. Suddenly, he realized why string cheese was awesome and started flapping it back and forth and running around the kitchen waving it like a victory flag. It was food and a toy!

Today, playing The Great Cookie Thief on iPad, he missed the "reset" button and hit the screen instead, instantly discovering how to get further than he ever had before. The next three times, instead of giving up as he usually does, he was able to finish the story, finally seeing the app's conclusion, and bring some peace to the town Cookie Monster terrorized, justice which has evaded him for months.

T.C. delights in the discovery behind every error. He doesn't stick to what he knows because that would mean he misses the best stuff. Mistakes are awesome and wonderful and show him things he never knew he could do. Similarly with art, mistakes reveal things. Whether it's a scene that goes nowhere but the trash can, yet reveals something about a character or whether it's an ambitious sentence that lands wrong and has to be reworked a dozen times to make sense to readers. Artists should never be afraid to make mistakes. Fuck ups are discoveries, and they may lead to epiphanies. 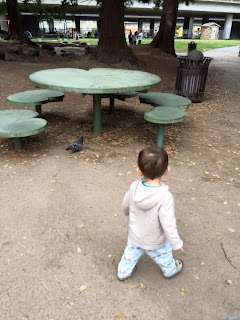 When I started to write this article way, T.C. couldn't cross a room without falling. A month or two later and he had walking short distances pretty much down, but he still fell to the Earth any time he tried something tricky like running or going around blind corners or any time he was tired. A wobbly thunk was a common refrain when he took off after his mom to stop her from going to work or tried to get to the cat before it could run away in terror from his grabby hands.

Still, he never gave up. When he fell, and he fell a lot, he just got right back up and kept going. He mastered the basics and it was time to move on. He pressed himself forward, heedless of the fact that failure meant a swift encounter with the hard ground. He's chasing a pigeon in these pictures. Of course it flew away whenever he got close (I'm not even sure it's the same pigeon), and he fell a few times, but he just got back up and tried again. It never even crossed his mind that failure meant he should give up.

I fail all the time writing. ALL. THE. TIME. I write crappy sentences. Articles I am sure will have a viral spike don't even hit triple digits. I set goals and miss them....badly. I tell myself "more fiction this month!" and then get caught up in raising a toddler and can barely get blog posts up. I get a lot of angry commenter pushback on something I thought was pretty well worded. Or I write fiction, expose my soul, and someone tells me they didn't really like it very much (and what's worse, I know their criticism hurts because they're right). This is just a part of the process. If we don't fail, we aren't risking. If we aren't risking we're just in our comfort zone. Sure, we could stay there and only ever succeed, but we'll never catch the pigeon that way.

T.C. is constantly taking risks. Some of them make my heart leap into my throat when I turn around for two seconds to go to the bathroom and he's standing on the edge of the dining room table or is pulling over a cutting board onto his head. But that's where the soda I put out of reach is, and his little hands wrap around it triumphantly, and I even let him have a few well-earned sips before it's back to his recommended water and milk only.

He runs and grabs the TV remote controls, desperately pushing buttons to try and turn on Daniel Tiger even though I told him no more screen time and I'm coming to turn it right back off. And every once in a while he steals a moment. Some day he's going to take bigger risks–some risks that will make my heart stop; some risks that I will have to punish him for taking; some risks that I'll have to make sure he knows are just not worth the reward; some risks that involve ethics or legality. And as he grows he will develop a complicated relationship with risk taking. Maybe he will take lots of risks. Maybe he will be cautious. (Seriously, I should not be given this much power to fuck up another human being.) But watching him fearlessly climb or run, I am reminded how cautious we learn to become.

It matters when we're talking about physical safety. It's a survival mechanism without which we'd have hugged a bunch of crocodiles and died off as an incredibly stupid species long ago. But it does us no favors when it kicks in around our art. 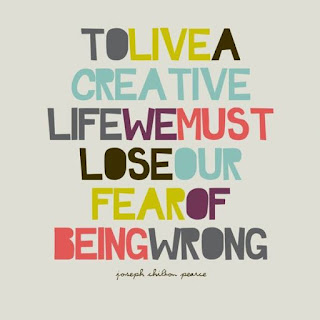 I know once we fall a few times, that bonk (metaphorical or literal) makes us weigh risk vs. reward differently, but everything most artists want is on the other side of our deepest fears, and we'll never reach them if we don't take risks. We have to peel ourselves open and risk everything if we want to reach out and touch another soul.


9. If you're crying, it might be that you want to be seen crying.

T.C. cries a lot. Sometimes the tears slip out of his eyes at genuine frustrations of playground injustice, and sometimes it's because he hasn't yet learned that some toys aren't his. Sometimes he's tired or hungry beyond reason. The world turned out not to be just for him, and he is having trouble adjusting to being a fallen god.

But sometimes it's a big show. He's our little thespian. I've seen him fall, look around to make sure he has an audience, and then start crying. Or he falls, starts to cry, sees that I'm not panicking and decides better of it. (Of course when he really tumbles, I'm there fast enough that people say they didn't see me actually move.) Sometimes he's checking in, but a lot of the time he just decides there's no point if he can't get some attention from the whole thing.

Art can be an angsty business. Certainly there are painful setbacks and a dreadful real world that demands its rent checks and dental appointments, and of course no shortage of awful rejections. And sometimes the sweetest thing can be to have someone sympathize with that difficulty and say, "there there." Or validate our excuse that we are too troubled to write today. Or agree that our last rejection was beyond awful. But sometimes that sweetness can also intensify those feelings, encourage us not to just shake it off, or give our emotions a performative flavor. (Must convince them that I'm suffering here!) What would we do if we had no audience to persuade that we were suffering? If we had no one to listen to how hard it is to find the time or energy to write? If we had no one who cared about our show?

I think a lot of us would just quietly get back to work.

Obviously there are real reasons for real tears. And both those and chronic illness (mental or physical) are certainly not performative. But sometimes it's helpful to ask ourselves if we would be this upset if no one were watching.


The first time we handed T.C. a spoon so he could try to feed himself, he got about three bites of the whole meal into his actual mouth. Most of those bites consisted of tasting the residue left on the spoon after the food had tumbled off. His sideways clumsy grip just meant everything fell out, down his front, and to the floor. These days he's still messy, but he gets most of the food at least in the general vicinity of his face.

When we first handed him the iPad, he couldn't make Grover see the monster at the end of the book and spent most of his time watching the intro screens to various apps unless we were using it with him and helping. But then he started to figure out where to push and when, and now he's figured out more advanced interactive books, and even a couple of basic games.

For months, he kind of just looked at the blocks my mom got him for his first birthday. We would build stuff for him, but his only real contribution was some palpable glee at knocking them over. After a while, he could see that they fit together but he didn't have the fine motor skills to press them down into each other to build things, so he would either hand me the block and point so I could press it down or his constructions would just be stacked loosely on top of each other. Now he not only presses blocks down and actually builds stuff, but he can see how top heavy stacking is less sturdy and finds the right sized piece to fit in the "ledges" that are left.

And of course there's the whole walking thing.

T.C.'s learning curves are dramatic, but he is a lesson to us all that where we are today is not where we will forever be. There is a fundamental truth about skills: if you keep doing them, you'll get better. I know we all want to BE good, "talented" writers, usually without really trying, but in the process we lose one of the most fundamental truths–that we can all be better if we keep working.