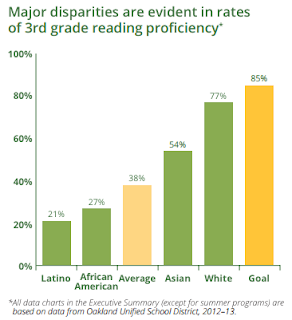 This is Oakland Reads.

Oakland Read's mission statement is to get the number of third graders reading at a third grade level from 38% to 85% by 2020.

Oakland Reads will be the subject of our Blogust fundraiser.

Here at Writing About Writing we always give 10% of every penny we make to children's literacy charities (usually local to me). We've given donations in Blog's name to the local outlet of the Oakland Library, helped buy a great set of readers for a local underfunded class that will last them years, and even helped the Reading Rainbow Kickstarter last year.

This August I have another a special fundraiser.

For the month of August I will be donating FIVE TIMES the normal amount to Oakland Reads (50%) of everything we make.

A THIRD donor has offered to match what we make here at Writing About Writing. That means until August 31, every penny donated here will become a 210% donation to Oakland Reads and a 90% donation to the blog.

Also, my readers are absolutely fucking amazing.
at August 04, 2015