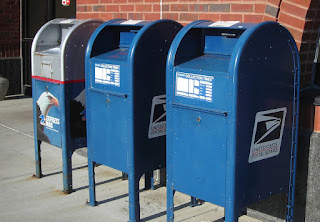 My brother's friend destroyed my joy of writing.

[Remember, keep sending in your questions to chris.brecheen@gmail.com with the subject line "W.A.W. Mailbox" and I will try to answer a couple each week (after this week). I will use your first name ONLY unless you tell me explicitly that you'd like me to use your full name or you would prefer to remain anonymous.  My comment policy also may mean one of your comments ends up in the mailbox. I may break two questions up into two posts if I'm running behind on a Thursday night.]

Sometime ago I met my brother's acquaintance who kinda crushed my spirit and my passion for screenwriting. I mean I love what I do, but the way he said what he said made me think. I don't know if he really meant well or if he pretended to mean well but slyly try to bring me down because he's jealous. He's an elementary English teacher in Singapore. He said to me, "When you've just started writing, you feel happy and high spirited. But one day, you will be tired of writing. That is something that you can't avoid. And when that time comes, you need to have something to make you hold onto your passion for writing. You need to find that something." I don't like my passion to be analyzed. I think I just don't fit very well with analytical people. Who's to say what my future brings? He kinda of destroyed the joy of writing for me even though it has just begun.

One of the downsides of writing about writing is there's very little in this game that is panacea (beyond maybe reading a lot and writing a lot, but it's hard to write a blog if all my posts just repeat that). Even advice as nearly universal as "Write Every Day" turns out to have important and meaningful exceptions.

One of the reasons I really like the mailbox posts is that it's usually possible for me to figure out where someone is and what kind of advice they might need. Do they need to hear the cold and unvarnished truth that if they treat their writing like a hobby, they will almost certainly not make money at it like it's a day job? Do they need the stern voice of the wisdom of ages to tell them that they are not too good for revision? Do they need the no nonsense industry insight that their first time book will not be having their train wreck grammar corrected for them by an editor their publisher assigns? Do they need a gentle nudge that writing is like any skill and it may take thousands of hours of practice before they are as good as they want to be? Do they need a word of encouragement that there is no better way to improve at one's craft than by sitting down and writing daily for at least a few minutes? Do they need to be gently held in a cupped palm and told that their dream is possible? Do they need a threesome joke?

Your brother's friend isn't wrong exactly, but he was a dill hole to hit you with that stuff when you were enjoying the writing and fresh and happy and springing like a sprite riding a rainbow between cotton candy clouds. It's like cornering the newlyweds at the reception JUUUUUUST as they're on their way to the honeymoon limo to talk about how every marriage eventually goes through some next level horrific shit or ends in divorce and it's never the same after they call to tell you that they fell in love at a rave and they won't be coming home that night. Like yeah, that's pretty much a given, but Jesus FUCK, uncle Alister. Timing. GOD!

Anyway, there are a lot of mailboxes in this blog from people who are having trouble writing or don't enjoy writing when it feels less like fun and more like work or just generally who have reached the point that your brother's friend was talking about, and I often talk to them about the same sort of thing. One of the biggest reasons to establish discipline and a regimen is because there are days where that's all that gets you to the page. And it may even be true that eventually you will hit a day when you don't want to write and you have to figure out what you want to do. But when you're first starting and you don't have your eye on some kind of specific career arc, it should all be about the enjoyment you get from it. Because that's really the reason we do art at all. We find meaning from it. It fulfills us. And some people find meaning in being casually creative and some attempt to reach within themselves and drive themselves to the limits. There's absolutely nothing wrong with just enjoying it.

I can't look across time and space into your brother's friend's soul to know what his motivation was for kicking over your sandcastle, but if you got a bad vibe from it, it probably wasn't from a place of genuine concern or nurturing. He probably wasn't lovingly encouraging you to find your center for the inevitable day that would come when more than just sheer exuberance would be needed to get you to the page. He was probably being an asshole. ("Oh sure. You love it now. But when writing doesn't come home from that rave and you get a call at four in the morning that you are now in an "open marriage," THEN how will you feel?") Then again, maybe he was trying to do right by you because he lost his own passion and he didn't want the same for you. Some people can be a little ham fisted with their well-intentioned advice. Uncle Alister for example....

In any case, R, I'm going to leave you with a thought that I hope is encouraging and not overly "analytical." (I'm not 100% on what you mean by that, but I hope it's people who try to pull apart your enjoyment of writing, and not anyone with any advice.) If he destroyed the joy of writing, hopefully I can't make things any worse.

Whether your brother's friend meant to or not, there are a lot of people in this world who when they can't do something will then tell other people they can't do it. And maybe Dillhole McDillerson didn't mean to punch the joy right out of you, but here's the truth and there's no getting around it:

Someone else out there will. They will intend to break you. That will be their goal–to beat the will to write right out of you. Not accidentally. Not tough-love-gone-wild. Not because advice is not a one-size-fits-all proposition. Just because they see you loving something that they don't have a relationship anymore. Like an ex talking shit about their old flame to the new partner at the wedding with wild stories of raves and 4am phone calls, they will want to shit in your sand castle so hard that you abandon your dreams the same way they did. So here's the takeaway I hope I'm not overstepping to say:

You don't need his permission to love writing.

You don't need mine either. You don't need anyone's! And as many people as will move through the world trying to "talk some sense into you" out of misguided paternalism or just take you down a peg or two because route 66 wasn't available for getting their kicks that day, you HAVE to learn to take the joy despite what anyone says and give yourself permission to write. Don't let this fucker (or any other fucker) gaslight you into doubting yourself.