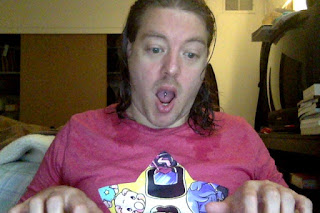 It's not great, but I'm back on the move. I poured a lot of energy into blogging last week, and I'm going to do the same for most of this week. I'm about to transition into a difficult phase of the year–the six weeks when I teach summer school. It's only a three day, three hour schedule, but that is stacked on top of other jobs. I'd like to kind of fall into that month and a half of terrible jazz hands with a track record of ass kicking. That way people keep thinking "I know there's more to him than this!" as I post my fifth straight week of "Music that helps me write" or "Posts from last month that people liked" post.


Now, whip out your mouth harps because it's time for me to lay down some home spun wisdom.

Once upon a time I couldn't figure out what to write for the day, and I had been watching a few people on Facebook toss around a meme taking a shit on English teachers (of which I am one, by the way) in a sort of all-teachers-are-ignorant-trash/no-English-teacher-ever-knew-what-they-were-talking-about sort of way. And maybe my thoughts that day were shaped more by the commentary I was seeing going along with the meme, but I decided that would be my post for the day.

I popped off a short little listicle about five reasons I hated that meme. Suddenly, people I didn't even think were reading my blog were chiming in with comments. Good, thoughtful comments too! A robust discussion happened. They challenged my position, made salient points.  I reconsidered several points and tried to better explain the ones I stood by. More discussion happened.

That wasn't the last time that post got lots of attention either. Every night that I remember, I put up a rerun from the archives of Writing About Writing over on the Facebook page of the same name. Usually it gets a little boost and a few more pageviews land. Each time this particular post comes up, it generates massive response, both from those who agree and those who don't as well as from people who came to understand a lot more from the article about why an English teacher might teach a particular symbol and folks who want to telescope the issue out to an indictment of the American education system. This last week it came around in the rerun rotation again, and promptly proceeded to pick up forty thousand pageviews, becoming my number four article of all time.

It's always a stressful post to put up. Even though people get more hateful about their replies to my thoughts on Nanowrimo or MFA's, it's this post that stirs people to be more thoughtful--that goes viral, that generates comments (both dismissive and unkind and incredibly thoughtful–agreeing, disagreeing, and with nuanced middle roads). The angry dillholes I've learned to ignore–roll my eyes, ban the ones who can't say it without hate speech, and move along. The ones who failed their papers and think their English teacher couldn't handle a different point of view get taken with a grain of salt. (I've given A's for writing and argumentation to enough people I disagreed with and F's to people poorly regurgitating the class lecture to wonder if a grape or three might not be sour.) It's the ones who make a salient point that cause me to question and re-question myself. I've gone back over the post time after time to make sure I believe in what I'm saying and I'm saying it as well as I know how.

And every time this post goes up and generates the feedback it does, I am struck by how insignificant I thought it was when I wrote it. A filler post on a day I couldn't come up with anything else. Fired from the hip (only later to be polished), and a quick flip of the bird to some cruddy meme that seemed to delight in suggesting English teachers are full of shit, and the anti-education impetus that perpetuated it.

And how many other posts have I thought "This is good. People will really like this," where I have gotten a fraction of the traffic? How many have I worked on for days and thought I nailed and even tried to be provocative and as funny as I could that have slipped quietly into the archives with a whisper?

You just never know what's going to stick to the wall when you throw it. And that's important to remember as a writer because it means not only do you want to throw your best every time, but you want to throw a LOT.

There's a Ray Bradbury quote: "Quantity produces quality. If you only write a few things, you're doomed." I'm a big fan of this quote not because I trust my writing ideology to any single quote-dropping writer, but rather because I see it merit out so often.

Of course it's inverse is true as well–that people who write a lot tend to achieve "quality" at some point, but what I see merit out the most is the doomed part.  A lot of people spend a lot of time on their One Thing™. And their One Thing™ might even be the best writing they've ever done, but often it is not received in quite the way they imagine.

This older article has taught me a lot of lessons. About how to communicate better, how to stand by my convictions when people are making great points that disagree, and how to thread the nuance with folks who disagree in good faith, but perhaps most of all that I never ever know what's going to grab people and resonate with them, so the best thing to do is keep writing, doing the best I can, being flawed and making mistakes, and learning to do it better.

I'll leave you with something that I've seen lots of places around the net. I'd love it if I could properly attribute it if anyone knows:


"The ceramics teacher announced on opening day that he was dividing the class into two groups. All those on the left side of the studio, he said, would be graded solely on the quantity of work they produced, all those on the right solely on its quality. His procedure was simple: on the final day of class he would bring in his bathroom scales and weigh the work of the "quantity" group: fifty pound of pots rated an "A", forty pounds a "B", and so on. Those being graded on "quality", however, needed to produce only one pot - albeit a perfect one - to get an "A".

Well, came grading time and a curious fact emerged: the works of highest quality were all produced by the group being graded for quantity. It seems that while the "quantity" group was busily churning out piles of work - and learning from their mistakes - the "quality" group had sat theorizing about perfection, and in the end had little more to show for their efforts than grandiose theories and a pile of dead clay."