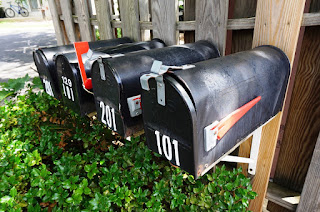 Is it okay for the writer to swear?

[Remember, keep sending in your questions to chris.brecheen@gmail.com with the subject line "W.A.W. Mailbox" and I will try to answer a couple each week (after this week). I will use your first name ONLY unless you tell me explicitly that you'd like me to use your full name or you would prefer to remain anonymous.  My comment policy also may mean one of your comments ends up in the mailbox. We may have a lot more mailboxes going on here soon.]

Hi, I was wondering if you could maybe shed some light on an argument me and my friend are having?

Basically, we're both aspiring writers (in high school though, doubt it's actually relevant by it might add some perspective) and we've gotten into a really bad argument over using curse words as a narrator. Meaning, not when writing something a character said or thought, but when I basically narrate the story itself... as the writer. Is using curse words ok, and could it helpful in your opinion or is it disrespectful to the story or something like that.

I think it's just a matter of style but my friend seems to think there is some unwritten rule about this thing when cursing is pretty much forbidden when not used in dialogue or character thoughts or anything like that.

Hope you could help! 😅

Aren't we writers spectacular? Even in our misspent youths, we're such nerds! While the whole damned high school world is getting into arguments over who "dissed" whom, long standing feuds about what went down in Mrs. Krazenski's fourth period social science class, getting bumped in the halls between classes, or the wayward affections of Cynthia Masterson, we're off ending friendships over the limits of third-person narratives. ("That would compromise the integrity of the focalizers filter....CHAZ!")

It does my heart proud. Let me wipe away this single tear and get back to your answer.

I hope the two of you are ready for a complicated answer (and hopefully some make up fist bumps or smooches or whatever you do) because you're both right and both wrong. There is an unspoken rule, and I'll get into why it's so ubiquitous. But like most of those "unspoken rules," once you start speaking about it, you find there are reasons for it and exceptions to it.

The answer to this is actually complicated enough that I had to write a primer on point of view in preparation. (It's okay. I really needed the kick in the ass to get started on the Very Basics menu.) I'm going to assume I'm not using any terms that you don't know in this reply, so pop back there for a refresher course if something is unfamiliar.

First of all, I'm assuming you mean third person because any other point of view is the actual words of the point of view narration and can include as much swearing as the writer wants the character to use. If your first person narration is from a sailor, they are not going to describe someone they don't like using polite euphemisms like, "He smelled like fecal matter."

So let's talk about third person and swearing.

Always. Always always always. It's your writing. You can do anything you want. You can do anything you can get away with. I don't like the oft-used phrase among creative writing teachers "If you have a good reason/you have to have a good reason," because everyone thinks their reason is spectacular. I prefer the phrase "Earn it." Now it doesn't matter how important your specfuckingtacular reason is. It's just a matter of asking yourself if you can earn it with your reader.  And that's where the real question hits. Because some things are harder to earn than others, and swearing narrators are not all created equal.

(Jack Nicholson voice over in my brain: "You can't handle the swears!")

Should you swear in third-person narrative? Here's where the fun begins.

In a subjective third person narrative, where the narrative voice goes into the feelings and thoughts of the focalizer character, you can absolutely swear, and many authors do.

Jeff clicked on his electric razor with a huff. This all-day-every-day office job shit was fucking ridiculous.

This is the kind of narration you might see in a thousand books on a million shelves. It's in the head of the character. Even though it's third person, we readers are not confused about who is making these value judgements or using hyperbole (no one really works ALL day and such a claim is not "objective"). We know that it's JEFF who is tired and that the words are reflecting his attitude.

Now if you have an objective voice swear, it gets trickier. Of course your writing style might just have coarse language, and that is yet another decision that is stylistic and up to you to earn. A fluffy subject matter doesn't pair well with coarse language.

Jeff took his morning shit while he looked at his phone. He had had a good fuck the night before, but fatigue still plagued him as his long days stretched on. He found the whole office job gig ridiculous.

Here your narrative voice is...okay (though you can see the edges of "where is that coming from?" starting to creep in as the reader may wonder why it's being SO crass). You might see a softer author use "crap" or "dump" or "sex" instead of "fuck," but the reader is probably not starting to distrust the voice yet–just wondering why it's using those words.  If the subject matter is equally mature and gritty, they will likely settle in if the book is simply crass throughout. Though if the subject matter of the book doesn't call for coarse language, that might be an atonal note that pulls them out of the story every single time it happens.

Now look at the swearing that you really want to be careful about. Value judgements that aren't coming from the focalizer.

Jeff despaired working an office job with long hours. His body ached constantly and his shoulders most of all. He was always tired, flopping into bed the minute he got home only to have to wake up unrested and start all over again. Weekends, the ones not spent working, were too short to rejuvenate him and it would be a year before he had earned a week's vacation. Only the thought of his bank account consoled him, and the memory of the day he had been hungry to the point of weakness with only thirty seven cents to his name. Begging on the streets of Moraga, and being greeted only with the faces of fucking assholes. He wasn't ever going to let that happen again.

Trust me that if I had gone on for a longer period of objective narration, the value judgement swearing would have felt even weirder.

Okay, so now....we have a problem. Who is it who thinks these people are "fucking assholes"?  Is it Jeff? Because the narrative has been establishing distance from Jeff. Even though we're discussing his feelings and thoughts, we're not in his head. The writing has stayed descriptive and objective. If it's not Jeff, then who is it? Is it the writer? Why are we getting editorializing from the writer?

See where this is going, Maxim?

The problem isn't that you can't do this in an objective third person. The problem is that IF YOU DO, you then have a reader who wonders if they can fully trust the narrator's objectivity. You're no longer an impartial "god." Now you're somebody with an opinion–somebody who has a bias that REALLY came through with "fucking assholes."

If it's Jeff, that's okay (but then the writer needs to occasionally show that they are going to drop into Jeff's head, probably by closing the narrative distance a little). If it's the impartial narrator (particularly if the narrator is supposed to be omniscient), now we have an issue.

A lot of swear words aren't inert. They carry some strong judgement. I can say shit instead of crap without too much trouble, but if I say "snotty fuckface" instead of "dour looking," I am really revealing an opinion. And so, using curses in an objective narrative third tends to undermine the voice as impartial.

This isn't universally "bad." A reader who can't trust a narrator will begin to look for "clues" about who the narrator is and what their filter might be. That can be delightful for a reader to sort of guess/detective where the lens is coming from when it turns out the narrative voice has a particular bias that is coming through. (There was a book–title long since forgotten–where I loved figuring out that the third person omniscient narrator was actually a minor character telling the story many years later, and adding up the clues to figure out which one.) However, if this narrative filter is unintended on the part of the writer, it just ends up making the writing sloppy, the voice untrustworthy (but for no reason), and detracts rather than adds. Not earned at all.

Why is there kind of sort of a "rule" about this? Well, it actually ended up helping that you mentioned you're in high school. Most of the third person literature you will have been exposed to by the time you leave a high school curriculum (that is repeatedly drilled into your head as "good") is going to be more impartial. There are a couple of reasons for that that aren't important to your question: they have to do with reading difficulty level, the introduction of point-of view needing very clear cut examples so it can be sliced away and studied discretely, what sort of dead-white-guy writing is generally considered canon, and how uncomfortable PTA's and school boards get if they see the word "fuck" in a book. Suddenly you have a cocktail for thinking "this is what good writers do," even if your sample size is skewed greatly toward a fairly wholesome teaching tool of dead white guys. I don't know how much reading you've done outside of school, but it will probably be useful to pay close attention to how authors you enjoy use their narrative point of view. Once you know what to look for, it's a lot easier to notice this stuff.

I hope this helps the two of you get back to fighting about Cynthia Masterson and Mrs. Krazenski.
at May 19, 2017

Email ThisBlogThis!Share to TwitterShare to FacebookShare to Pinterest
Labels: The Mailbox, The Very Basics