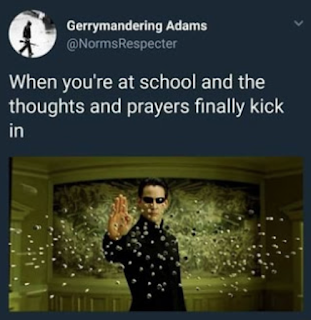 This is part 1 of 25 Narratives

The narrative we most often hear.
Crickets.

I have to take a moment to hand it to the lawmakers who have plowed forth with the idea of arming teachers and started test balloons and feasibility studies.

Oh don't get me wrong, that's the worst fucking idea since Australia imported toads to deal with their beetles, but in some way at least it is stepping out of the usual narrative, which is silence. That’s what we hear most—the sound of silence. The sound of politicians doing nothing.

Take a couple of weeks. Pretend to care. Tweet "Thoughts and prayers." Let the opponents tire themselves out by telling them you agree something has to be done. Let it all die down. And actually do nothing.

Few things prove the in-the-bones feeling that an oft-repeated atrocity probably isn't caused by the sham explanations someone offers up repeatedly than does doing nothing over and over again. If they thought it was violent television, they would be falling over themselves to enact strong FCC regulations. If they thought it was mental health, they would be scrambling to find the budget for better mental health care. When children are dead (and really dying in real time), we usually go fucking off the rails trying to find and stop the cause. If people really thought it was prayer in school that could have saved children's lives, they would be crawling over themselves to make it compulsory. We'd see fifteen super-PAC's overnight and a right-wing coalition of senators and congresspeople engaged in a national campaign. There would be laws in half the states tomorrow.

They know full well that's not what it is. That's why the minute it's out of their mouth, they go back to doing literally nothing.

Everyone knows all that shit has nothing to do with these shootings.

They just want to throw detractors off the scent––they want it to be ANYTHING but under-regulated firearms and a wink/nod culture of toxic masculinity. If it sounds like it might be a half-way plausible explanation about WHY CHILDREN ARE DEAD, then they go with it. But when they offer up that crap, but don't turn around and try to do something about it, it kind of exposes the deep-down truth not being talked about at dinner parties: that no amount of bodies could possibly make any damn difference if the price is going to be the slightest regulation of their guns.